NSTP And Freedom Of Speech 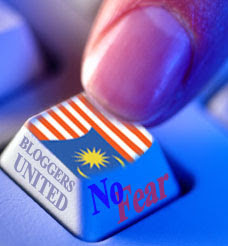 I'd never have thought it, but the New Straits Times Press (NSTP) suing the two bloggers has united Malaysians all over the world.

I have stopped reading the NST - even browsing its website.

It's been over a week. The court proceedings have been scheduled for 30th January. I'm fairly certain there would be a big turn out from the Malaysian public.

Email ThisBlogThis!Share to TwitterShare to FacebookShare to Pinterest
Labels: Freedom of Speech, NSTP

At this point even I have to admit it's not about morality anymore.

I deliberately chose to avoid commenting on Schindler's List and Prince of Egypt in my previous post because I felt they deserve special mention.

It is no secret that Schindler's List which revolved around the Jews during Holocaust was directed by Steven Spielberg, also a Jew.

That somehow offended the Film Censorship Board. It was deemed as Zionist Propaganda and consequently banned.

Not that anti-semitism is anything new.

Last year, Bernama reported that Umno Youth will release a list of brands and international companies with operations in Malaysia that are known to be supporting the Israeli regime financially.

Umno Youth chief Khairy Jamaluddin said if there was truth to the claim, the people must be told so they could make their own assessment whether they wanted to continue supporting the company which has a chain of shops in the country.

In other words, BOYCOTT Israel.

Again, nothing new. My passport does not permit me entry into Israel anyway.

Prince of Egypt managed to find itself hurting Muslim sensitivities. Don't ask me how. Moses appears in Islamic history the last time I checked.

It's not just Hollywood-produced-Jewish-related movies that have been banned. A local director fell afoul of the Senseless-ship Board over his movie, Lelaki Komunis Terakhir, loosely translated as The Last Communist. It revolved around Chin Peng, the leader of the Malayan Communist Party.

Amir Muhammad, who is Malay Muslim, believes the controversy surrounding his film, like so much else in this country, may be less a matter of ideology than race.

The ban appears to have resulted from the pressure applied by 'Berita Harian', a paper whose politics Mr. Amir classified in a recent blog entry as "verging on the ethnocentric and semifascist."

One of its editorials advised Mr. Amir to stick to documenting the lives of Malay heroes. (Most Malaysian Communists were of Chinese descent.)

My maternal grandfather was shot by the communists when my mother was but a few months old. I never knew him.

As a result, there is NO love lost between me and the communists - regardless of race, but I resent the restriction of my individual right to watch any movie about communists or communism.

After a screening was held for Malaysian members of Parliament, the home minister, Radzi Sheikh Ahmad, said the real problem was that the absence of violence in the documentary could create the misconception that Chin Peng was not himself violent.

Mr. Amir said, "I think this is the first time a film has been banned for not being violent enough."

Hell yeah. They're running out of decent excuses, too.

Email ThisBlogThis!Share to TwitterShare to FacebookShare to Pinterest
Labels: Censorship

Oh yes, the bane of every self-respecting, remotely intelligent individual.

Apparently, someone thinks you are TOO STUPID to make decisions for yourself, so someone has taken it upon themselves to make it on your behalf.

The Malaysian censorship board is a prime example.

They consistently outdo themselves with Idiotic Reasons To Ban A Film.

Top on the list is Austin Powers, The Spy Who Shagged Me for too much sexual innuendo. It was a goddamn spoof, for crying out loud.

Anyone with a desire to emulate Austin Powers or worse, shag him would be in dire and desperate need of some serious counselling already - I doubt there'd be room for further damage potentially caused by watching the movie.

So why did the National Film Censorship Board ban it?

"In order for us to instil good morals and values in our people, we have to stop importing films that are not appropriate for our country," Board chairman Shaari Mohamad Noor commented.

Information Minister Tan Sri Khalil Yaakob adds his two cents worth. "One must consider the "social damage" caused by certain movies especially when "a certain trend of thought is embodied in the film".

We really need all that protection, you know.

Good ole Kylie Minogue got the cold shoulder as well.

TV programs aren't spared. Two episodes of Friends, The Video Tape, and But I'm A Cheerleader, as well as an Ally McBeal release, The Queen fell victim to the Senseless-ship Board.

Of course, The Hours was predictably banned for showing women kissing other women.

The head of the Film Censorship Board said it was protecting "the interests of the country and people from bad influences and negative elements shown in films".

You know, I'm really so OVERWHELMED by all this concern for me and my morals that I've lost the key to unlock my chastity belt.

And then there are the Truly Moronic Reasons For Banning Movies.

Take Zoolander, for example. It was banned in Malaysia because it included a plot to assassinate the country's prime minister. It would be ridiculously generous to think that the Censorship Board is even vaguely familiar with the notion of humour.

Let's not neglect the religious issues.

Bruce Almighty was shown the door because it revolved around a man challenged by God to take over the running of the world – found offensive to Muslims. A minister declares, "We cannot equate ourselves with God Almighty even as a joke."

Daredevil was banned for being too violent and in some quarters, having a name which sounds, well, satanic.

Violent? Heck, we Malaysians could TEACH the world a thing or two about violence.

Email ThisBlogThis!Share to TwitterShare to FacebookShare to Pinterest
Labels: Censorship

The Malaysians Have Finally Protested

And God, am I proud! I never thought I'd live to see the day, but as Stupid Malaysia states, the people's patience has finally reached tipping point.

This latest protest came about in the face of rising toll charges within the city. It's truly nefarious the way the government - or to be specific, the Barisan Nasional party - couldn't give a rat's ass about the people's needs.

It looks like this demonstration took place in Sunway Pyramid, though as far as I know, the mainstream media chose not to cover it for political reasons.

But look at the reinforcements. The riot police (or Federal Reserve Unit) do look resplendent in their gear, though not too concerned about the issue at hand. In fact, some of them look downright bored and restless.

They can afford to. So far, we peace-loving Malaysians haven't turned violent.