Australian-owned company Lynas is quietly shipping rare earth to a processing plant in Malaysia - without a firm plan in place to dispose of dangerous radioactive waste.

If a manufacturing plant involving radioactive materials moved into your community, one of the first things you would ask is, "what’s going to happen to the waste?"

This is exactly how residents of Kuantan on Malaysia’s east coast reacted when the Australian company Lynas announced plans to build LAMP, the world’s biggest rare earth processing plant in their area.

Several years later, they have no clear answer. Indeed last week, while the plant that will use concentrate imported from Lynas’s rare earth mine at Mount Weld in Western Australia was finally ramping up for production, the Malaysian Government and the company were in direct conflict about what would happen to the waste. 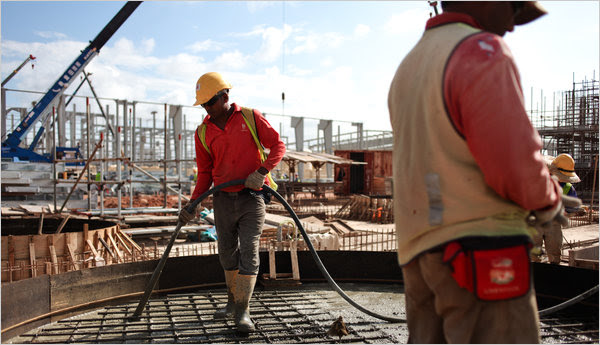 On 8 November, after two years of delays caused by court challenges and inquiries, a halt on a temporary licence granted to protesting citizens in September was lifted. Five days later, Lynas secretly moved 100 containers of rare earth concentrate from a depot at Bilbra Lake and quietly shipped them through Fremantle Port. The containers were unloaded and delivered under police escort to the $800 million plant on 22 November.

Read the rest here: The Toxic Waste That's Not In Our Back Yard

Oh, and by the way, the three Kuantan residents have failed their bid to obtain a stay of the government’s decision to issue the temporary operating licence (TOL) to Lynas Malaysia.

The judges at the Court of Appeal upheld the Kuantan High Court decision as “correct in fact and in law" and have now ordered costs of RM20,000 to be paid by the residents.

Half was awarded to jointly to Lynas Malaysia and Lynas Corporation (the Australian side), and the rest to science, technology and innovation minister and the Atomic Energy Licensing Board.

That is Malaysian justice for you.
By Crankster at 05:21 2 comments:

Despite Malaysia's high-profile anticorruption crusade, half of the corporate executives surveyed by a global corruption watchdog believe that competitors have obtained business through bribery, underscoring the hard task ahead for Prime Minister Najib Razak's government in weeding out graft.

Transparency International said Malaysia scored worst in the 2012 Bribe Payers Survey. It asked about 3,000 executives from 30 countries whether they had lost a contract in the past year because competitors paid a bribe—and in Malaysia, 50% said yes. Second on the dubious honor roll was Mexico, at 48%.

Japan ranked as the world's least-corrupt place to do business, with just 2% of respondents saying they had lost out due to bribery; Malaysia's neighbor Singapore was second-cleanest, at 9%. Even Indonesia, with a long-standing reputation for corruption, fared better than more-developed Malaysia: Southeast Asia's largest economy came in at 47%. By comparison, 27% of respondents in China said they thought bribes had cost them business.

"It shows the attitude of private companies in Malaysia, indicating that bribery in the public sector could be systemic and in a sense institutionalized," said Paul Low, president of the Malaysian chapter of Transparency International.

Since taking office in 2009, Mr. Najib has pledged to eradicate corruption and regain public confidence. Hundreds of cases have been investigated. The government has established special courts to hear corruption cases and is working to introduce harsher punishment, said Ravindran Devagunam, director of corruption prevention at government think-tank Pemandu. The body reports to the prime minister's department.

With Lynas and other issues that clearly violate the nation's best interests, is it any wonder?

It looks like Barisan Nasional know that this is going to be a tough fight.

They're going to go down fighting at least, by bringing in the big guns like the ex Premier.

The question is, does Old Nyanyuk still have clout?

"I have promised that I will campaign," Mahathir, 87, said in a Dec. 5 interview in Putrajaya, Malaysia's administrative center near Kuala Lumpur. "I don't know whether I have enough influence or not, but I think people still remember me."

I remember you, mate. But not for reasons you will like.
By Crankster at 17:49 No comments:

GLASS HALF EMPTY: Malaysia’s leader warned voters that their country risks economic collapse if the opposition wins national elections that must be held by mid-2013.

PARTY’S ON: Prime Minister Najib Razak opened his ruling party’s annual congress with a forceful speech urging supporters to brace for what is expected to be one of Malaysia’s most intensely fought elections since independence from Britain in 1957. Najib’s United Malays National Organization is determined to reverse setbacks from 2008 polls that triggered the multiethnic government coalition’s worst performance in more than five decades of uninterrupted rule.

THE WAY HE SEES IT: Najib accused the opposition in a nationally televised speech of banking on false promises to sway voters. He predicted the national debt would soar and Malaysia would lose its economic sovereignty

Copyright 2012 The Associated Press. All rights reserved. This material may not be published, broadcast, rewritten or redistributed.
*
By Crankster at 03:09 No comments: