I don't generally read Chedet, but this piece about the GST had some really good points.

There are all types of taxes out there.

In the UK, the most prominent one out there (apart from the National Insurance) is the VAT (Value Added Tax) which is imposed on most goods and services except the essentials like grocery food.

It's a blanket 20% that is applied on all services like legal services, advertising, photography etc, and obviously the retail industry.

Hot food from restaurants and takeaways are not exempt, and it also costs an additional 20%, which is pretty steep.

This is why many Malaysians who have lived abroad say that additional tax is to be expected as a way of life. What they neglect to mention is that this tax is usually put into improving infrastructure and other public services like transportation.

That, sadly, isn't the case for Malaysia. You and I know that the GST is to repay the 1MDB debt. Theoretically. They're probably spending it at will, and perhaps to even gear up for the coming election.

There is no way of finding out. The Malaysian government doesn't necessarily condescend to particulars.

In the USA, the federal tax is imposed on every single legal resident and expatriate; however some states also have income tax. These are states such as California, Oregon, New York, Maryland.

In the states that don't have income tax, the sales tax is imposed for nearly every item. This means that the burden of tax is carried at a disproportionately higher rate on the backs of the less well-off.

America is in severe decline, and this is manifest in the ridiculous decisions of its citizens -- for instance, by voting an imbecile who is not qualified to make business decisions, much less political ones.

This is what is happening in Malaysia as well. Which is probably why there is much discontent.

Najib has a degree in Industrial Economics from the University of Nottingham. He should know better than others.
By Crankster at 05:13 2 comments:

Email ThisBlogThis!Share to TwitterShare to FacebookShare to Pinterest
Labels: Taxation

The Role Of The Common Man

These are words of wisdom from the intellectual and academic, Noam Chomsky, to the American people.

But it's something that we Malaysians can take away as life lessons too.


Noam Chomsky Explains the Best Way for Ordinary People to Make Change in the World, Even When It Seems Daunting

I think of love as something strong and that organizes itself into powerful, direct action. We are not engaged in a struggle that means we sit down and do nothing. There’s a great deal of difference between non-resistance to evil and non-violent resistance. Non-resistance leaves you in a state of stagnant passivity and deadening complacency, whereas non-violent resistance means that you do resist in a very strong and determined manner.

Read the full article; you won't regret it.
By Crankster at 07:13 No comments:

Email ThisBlogThis!Share to TwitterShare to FacebookShare to Pinterest
Labels: Protests

I learned a new thing today. I now understand why Dr M is vehemently against Najib Razak.

Some of you may remember that in a previous post, I wondered aloud, "Dr M clearly has an agenda, be it for nationalistic reasons (he is in his 90s after all), or to achieve a personal vendetta (you'd think he'd have mellowed by now)."

I think I have my answer: it's a bit of nationalism but also a healthy dose of personal vendetta.

While the rest of us were blithely getting on with life, it turns out that back in May 2016, Putrajaya withdrew Mahathir’s police outrider service, in vengeance for his attendance of the anti-government demonstrations.

A few months later, they also ended the contracts of Dr M’s cook and office assistant. 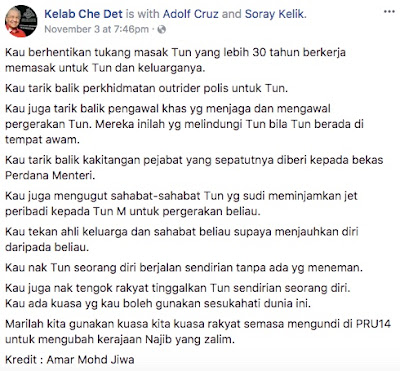 And now it looks like they have even withdrawn his special police protection.

Now I can see how this might deter a lesser man. But Dr M is a fighter, and his charisma attracts loyal followers who take up his cause. Najib does not quite have the same mettle, and this is where he loses the battle.

Dr M himself, was highly vindictive during his youth, especially in his dealings with Tunku Abdul Rahman. He was formidable in his taking down of Anwar Ibrahim, imprisoning him for sodomy. He was brutal towards those who opposed him politically.

I have not forgotten. Dr M may say, "Melayu mudah lupa," but I am not easily duped into warming up to him.

Justice Pao: The use of ISA to detain Tan Ka Kheng - who was trying to fight against the Bukit Merah Rare Earth plant (ARE), Bakun dam, etc, to protect the people of Malaysia - by Mahathir shows that the law has been misused by BN.

This liar of a PM has been blatantly using ISA to remove anyone who stood against him so that he can protect his children and his cronies, who have been pilfering the Treasury.

Yet he has the cheek to say that ISA is good for the country.

Clearly others remember his shenanigans as well, and note that he didn't always have the citizens' interests at heart.

Ferdtan: Thank you Malaysiakini for choosing professor Tan Ka Kheng to interview in 'ISA Focus'. He is a much lesser known ISA detainee nabbed under Operasi Lalang in 1987.

It is heartwarming to know there are people like Tan who unselfishly gave up his time and liberty to stand with the common folks against the tyrannical government then under Mahathir.

The beauty of the whole article is that Tan remains steadfastly resolved after many years had passed to continue the struggle, this time with the Stop Lynas Save Malaysia (SMSL) group.

I agree. In fact, Tan Ka Kheng did the same thing that Wong Tack of the Himpunan Hijau group did, by protesting the harmful industry that our nation was about to accept in exchange for a higher GDP.

Though Wong also embarked on a long walk from Kuantan to Kuala Lumpur in his attempt to raise awareness and garner much needed publicity for his cause. Given what had happened to Tan Ka Kheng, it was highly risky for Wong Tack to do the same. Under a different Prime Minister, Wong Tack could have been arrested under the ISA and put away for some time.

Notwithstanding that he had also vowed to block Kuantan port if that rare-earth crap ever came in. Now there's a man who sacrifices his all. As I have always said, this man is a hero.

So then you have Najib crowing about the lack of ISA arrests under his administration:

He contrasted his government’s approach to dealing with political detractors during the administration of the fourth prime minister Tun Dr Mahathir Mohamad, who had made an about-turn by allying himself with DAP leaders he had previously detained under the ISA, notably the father-and-son duo Lim Kit Siang and Lim Guan Eng.

“I want to ask you, ladies and gentlemen. How many people have I put under ISA? How many? Zero!” Najib said to thunderous applause.

Except that Najib just replaced the ISA with the Peaceful Assembly Bill. No points there for Najib, kleptocratic or not.