Malaysia Boleh News Of The Year

Our much beloved ex-PM has made it into the top 3 anti-Semites elite-list.

Of course, that is nothing new. He has been spouting bigoted statements ever since he joined UMNO way back when the Ice Age was coming into the groove. 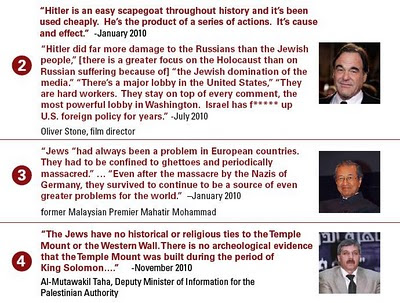 In fact, I even echo the sentiments of nominees 7 and 9.

Go check out what HartalMSM has to say about the hypocrite.
By Crankster at 21:01 8 comments:

The Inordinate Obsession Over Three-Corner Fights

I confess that I once had my doubts about the third force.

Like many other concerned Malaysians, I anguished over a potential three-corner fight which may potentially give Barisan Nasional the upper hand.

Most people really want BN out of Putrajaya and its politicians either behind bars or in the zoo.

BN in the mean time has vowed to reclaim Putrajaya at all costs. The best way would be bribe Pakatan Rakyat MPs to jump over to their side.

The problem is, it has worked before. There was a huge Frog Festival that ended in the Perak democratic crisis, where Perak returned to BN hands due to MPs leaping over to the other side.

This has to be nipped in the bud. We have no room for error in the next General Elections.

Misbehaving MPs from PR have not been admonished nor has any disciplinary action been taken against them. There is merely silence.

In the midst of these discussions on how to take this nation forward, the scum at the bottom of the sewage pond is unable to resist spinning for its masters.

NST discredits Pakatan Rakyat by misquoting various civil liberty leaders with attempts like Some PR reps not fit to walk a dog. This agitates various anti-BN segments, to the extent of losing focus on the big picture.

The big picture is that we need good policy-makers in parliament, not just random and unqualified representatives of a political party belonging to the Opposition.

The MCLM president Haris Ibrahim, gave a very good example during the first public forum held by the MCLM to engage with the citizens and address their concerns.

He asked if anyone was from the Wangsa Maju constituency. There wasn't, but most people knew that Wee Choo Keong, a BN-friendly froggie is the current MP.

"Assuming that Wee decides to kiss and make up with PKR," Haris postulated, "and they decided to let bygones be bygones..."

The audience was silent.

"What if PKR decided to forget the past and allow Wee to run for MP again, and he was running against our independent candidate Imtiaz, should we withdraw Imtiaz to avoid having a three-corner fight?"

There was audible objection. "Hell no," I privately mouthed.

"Ah," said Haris smugly, "so it depends on the situation then?"

And that was it in a nutshell.

The MCLM is not advocating a three-corner fight to make things difficult for Pakatan Rakyat. Everyone with half a brain-cell knows that Barisan Nasional is chronically incapable of reform and thus has to be removed.

But good people need to be voted into parliament. Let us not lose focus of that.

A very good description of MCLM can be found HERE. It may be a little deep, but it is certainly well thought-out.
By Crankster at 21:20 2 comments:

Email ThisBlogThis!Share to TwitterShare to FacebookShare to Pinterest
Labels: MCLM

According to the booklet, PR promised instant reforms within the first 100 days of them taking over Putrajaya.

Among the reforms are:

1. A restructure of institutions including the Elections Commission (EC), the Malaysian Anti-Corruption Commission (MACC), the Attorney-General’s Chambers and the Royal Malaysian Police. During a debate on the policy framework, DAP’s Anthony Loke said PR bring the MACC under the purview of Parliament.

2. A repeal of the Internal Security Act (ISA)

3. Instruct Khazanah Berhad, Employees’ Provident Fund (EPF) and other government bodies to take over highway assets from the concessionaires in order to abolish the toll system.

5. Acknowledging the role and sacrifices of civil servants by studying the current pay schemes and increasing the incentives for teachers by RM500 a month

7. Offering free wireless Internet access to those in urban and semi-urban areas

8. Cancelling Felda Plantations and opening up its farms to second- and third generation Felda settlers.

9. Increasing oil royalty payments to Sabah, Sarawak, Terengganu and Kelantan to 20 per cent from 5 per cent currently.

10. Formation of a Royal Commission to solve the problem of illegal immigrants and citizenship issues in Sabah and Sarawak.

Let's see if they stick to their word, should they make it to Putrajaya in the next round.
By Crankster at 21:43 No comments:

Email ThisBlogThis!Share to TwitterShare to FacebookShare to Pinterest
Labels: Opposition

The BN government recently discovered via WikiLeaks that they weren't held in high esteem by their southern neighbours as originally thought.

But Najib insists that Malaysian politicians are competent. 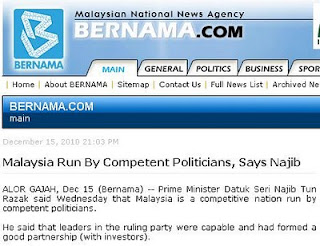 But the phrase "Competent BN Politicians" would be an oxymoron.

Mohd Said & Bung Mokhtar - these two fleas had their day in parliament.

Shahidan Kassim - this genius thinks Facebook should be banned in the name of national security.

And then we could come to a conclusion.
By Crankster at 21:19 No comments:

Email ThisBlogThis!Share to TwitterShare to FacebookShare to Pinterest
Labels: Politicians

If you still haven't a clue what MCLM stands for, it's Malaysian Civil Liberties Movement. 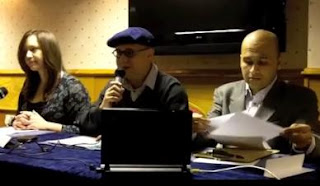 It has been registered in the UK since our national registry for societies has been pussy-footing (surprise, surprise) for way too long.

Since they generally convene in London, you really do not want to miss this opportunity to get in touch.
By Crankster at 20:53 1 comment:

Email ThisBlogThis!Share to TwitterShare to FacebookShare to Pinterest
Labels: MCLM 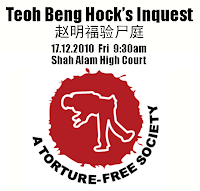 Apart from a dismal (though amusing) performance from the MACC, nothing much has developed from the Teoh Beng Hock inquest.

Perhaps there isn't enough pressure on the government.

Anyway, lawyers from both sides will make their submission at the next session, the coroner will deliver his verdict after the submission and the inquest should end soon.


All Malaysians - the Teoh family, you and I - have been asking for the truth for Beng Hock, and thus your attendance at the inquest will be a strong support to Teoh family to continue to seek justice.
By Crankster at 13:07 No comments:

We all know the BN government is stupid, but to put the witness who implicated police in the R Gunasegaran death-in-custody inquest under ISA?

I grow more and more in awe of BN stupidity each day.

First, the witness was arrested in a violent manner in full view of other witnesses. Then he was slammed with trumped up drug charges.

Evidently nothing could hold water.

And when all else fails, bring in the Internal Security Act.

Related:
Time to walk your talk, people. Selvach needs us now. Will you be there for him?
By Crankster at 20:40 No comments:

WikiLeaks And Freedom Of Speech

My friend Tim sent me this link a couple of days ago.

Unflattering remarks from Singapore have been a highlight of the past few days and Malaysia has handed over a "protest note".

Malaysian Foreign Minister Anifah Aman summoned T. Jasudasen, Singapore's high commissioner, and handed him a protest note over the "unjustified comments" made by Singaporean diplomats, the ministry said in a statement.

"The foreign minister also conveyed Malaysia's deep concern and displeasure over the comments as revealed by WikiLeaks and subsequently reported in the media," it added.

The Malaysian government is incapable of accepting negative feedback from its citizens. How well can it swallow insults from its neighbour, I wonder.

According to our neighbours:

1) Malaysia is in a "confused and dangerous" state due to its incompetent politicians;

2) There is a "distinct possibility of racial conflict" in Malaysia which would see ethnic Chinese "flee" the country and "overwhelm" Singapore.

3) Najib Razak was reportedly described as "an opportunist" who "would not hesitate" to be critical of Singapore if "it is expedient for him to do so".

Of course, everyone is abuzz over the news that Anwar Ibrahim had walked into a honey trap.

His sexual orientation is the least of my worries. I am more concerned about his politics of cronyism and selective favour, not to mention his disconcerting obsession to become Prime Minister.

All that being said, I am still bemused at what people will say if they think no one will know.

P.S. WikiLeaks is not the gospel truth. There is a disturbing tendency to treat media reporting based on the US State department cables leaked to WikiLeaks as revealing some sort of ultimate, higher truth - WikiLeaks: take a deep breath
By Crankster at 20:16 6 comments:

Email ThisBlogThis!Share to TwitterShare to FacebookShare to Pinterest
Labels: Freedom of Speech

Over two years ago, one man asked, "Is there a statesman in the house?"

These are his words:

We need a real leader; someone whose commitment to truth, social justice and nation building is as uncompromising as is his or her rejection of politics, greed and vanity. Though we do not need a saint, we need someone who understands that Malaysia belongs to all of us and that its future is our collective future; someone who appreciates the immense power that lies beneath its surface and is capable of harnessing and unleashing that power to capture the world.

Though, someone who could call a spade a spade and get on with dealing with things practically and fairly would be a good start.

Now, is that too much to ask?

Today, he has taken up the challenge of national service by agreeing to run as a political candidate. 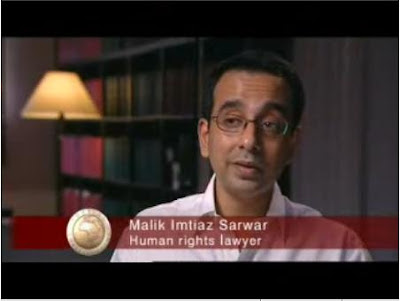 This is one guy that many political parties have yearned to field as their candidates. MCLM is capable of producing miracles!

Forget his excellent track record in human rights activism - he is one would aspire to live up to the words he uttered above.
By Crankster at 20:27 No comments: 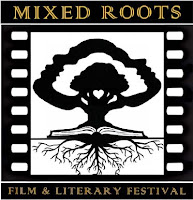 I blogged about the 2nd event early last year.

The Mixed Roots Film & Literary Festival is a non-competitive, annual arts festival dedicated to sharing and nurturing storytelling of the Mixed experience.

The Mixed experience refers to interracial and intercultural relationships, transracial and transcultural adoptions, and anyone who identifies as having biracial, multiracial, Hapa or Mixed identity.

Many Malaysians are just as multi-racial as the Americans.

It's a pity we do not celebrate our diversity.
By Crankster at 20:37 2 comments: