Lynas: Introspect Of Why

A CRANKSHAFT reader, Walla, has some valid concerns which he has kindly compiled for the benefit of all readers.

Some preliminary concerns on the project:

(a) where is the environmental impact assessment on the Gebeng refinery, especially with regards the disposal of the waste?

If the Australian government can make public to its citizens two environment impact assessment requirements for the Lynas mining operation where the rare earths are merely to be concentrated for final processing, why can't we have the environmental impact assessment requirement for the final processing phase where toxic waste and harmful byproducts will be deposited?

The government has suggested that the waste be shipped back to Australia. A moment's thought will tell you if Lynas is willing to ship it back to Australia, they would not have set up the plant in Malaysia in the first place.

Furthermore, the very fact the government can make that suggestion says as much it is not confident of defending any environmental impact assessment in its hand.

So we come to the next question:

(b) why did Lynas not set up the last segment of the refining process in its complex in Laverton Western Australia in the first place since that would have reduced their costs of having to pre-concentrate the ore, pack it, transport it by road and rail to their loading port, and ship it all the way across the ocean to Kuantan to be offloaded and transported to Gebeng to be processed whereupon ship back the rare products minus the waste to be sold and exported?

There can only be one answer. Yes, they don't want the waste in Australia. So what cause does Malaysia have to want it as well? Can anyone in the Malaysian Cabinet furnish a reasonable answer?

Which brings me to another matter:

(c) Pahang gets monsoonal floods. Gebeng is in Pahang. The Lynas plant is in Gebeng. The plant is being constructed on flat land open to floods (remember Thailand).

We can see for ourselves how flat and low-lying the site is:

In a bad case scenario, your conclusion then will be that our locals will be having their seafood impregnated with the sodium sulphide reagent used to concentrate the lanthanide ore that has come all the way from Mt Weld of Western Australia. That they will also be losing their hair and teeth at the same time cannot be entirely excluded.

So it remains to take one more step back on this matter:

Lynas is pushing the project through as quickly as possible. It is finalising its phase two expansion of its extraction plant where output is to be some 22,000 MT/year. In fact, 5,000 MT is ready to be shipped over.

Maybe the answer for the rush is geopolitical. Japan is 97% dependent on China for rare earth elements necessary for its high-tech products.

That was why the Japanese trading house SojiTz Corporation with the full and eager blessing of the Japanese government had pumped into Lynas Corporation USD325 million just in time to shore up the company after it had suffered ten years of financial distress including the collapse of one funding deal after it had acquired the Mt Weld rare earths mine at the height of the global financial crisis.

For that investment, Sojitz Corporation will get marketing rights to at least 8,500 MT of rare earths a year over 10 years and Lynas expects to corner at least 8% of the world's rare earth supply.

Also note that the main processing unit are the rotary kilns in the Gebeng plant. They are supplied by Toyo-Thai.

It therefore seems this Lynas plant in Gebeng has nothing to do with Malaysian interests. After all, the planned headcount is only some 300 locals, and the value-add to our trade figures will be marginal since we won't own the final product. Only Japan and Australia will own the final product. Malaysia will only be the dumping ground, and like Malawi the other country where Lynas has an operation, probably the two M's will be left with the dishwater.

Maybe Lynas just went through the list of countries starting from A down to L, and then when it reached M, Malawi and Malaysia said "yes". The question is - why did everyone else say "no"? If Japan was so eager for the Lynas supply to proceed, why not have the refining on Japanese soil if it has been assured to be safe?

In the end, Japan will get another source of rare earths for its high technology, Australia will gain traction from the US as a new world source of rare earths, Lynas Corporation will see its share price rise in value, its shareholders will disdain their usual lobsters for caviar, and the citizens of Malaysia, especially those who live and work in the vicinity of Lynas Malaysia will get: 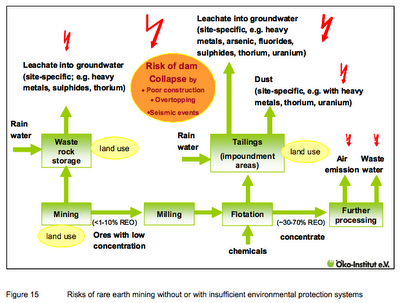 Note the photos of the Gebeng plant. It's not high-tech at all. More like, you know, something for Syabas or Alam Flora. Say, radioactive sewage?

The government of this country owes the rakyat of Malaysia a full restitution on the matter.

Together with all the other issues like the NPC, Felda and 1Care, this Lynas issue will sink BN in the forthcoming GE13. 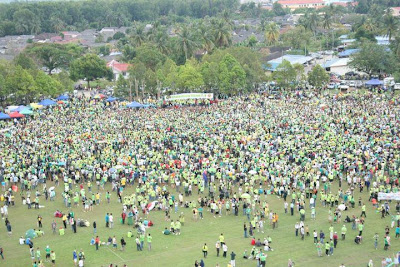 It's safe to say that there were at least 5000 in Kuantan.

And in KL, the numbers were massive. Any KL blogger's site would be testament to that.

Lynas is an easy issue -- it's about pure unadulterated greed of politicians and using Malaysia as a dumping ground for toxic waste that even Australia wouldn't put up with.

It's about time we begin to agree on other issues like race and religion as well.