Back On The Topic Of 'Progress' And 'Regression'

And as promised in my previous piece about Iran, this time about Afghanistan.

Some of you may have watched a movie called The Kite Runner. Actually it's a book by Khaled Hosseini, and I only came across it when I was living in the UK.

It describes the life of a Pashtun boy whose friend is Hazara. There is a certain amount of racism against the Hazara people who are one of the minorities (who have Mongolian ancestry) in Afghanistan. The Pashtuns are Sunnis while the Hazaras are Shiites.

Anyway, both the book and the movie describe what Afghanistan was like before the invasions by the Soviet Union, Taliban and United States of America.

Most notable is the way the women were: back in the 1960s, it appeared to be a carefree life, with educated, identificable and sociable women on the streets. 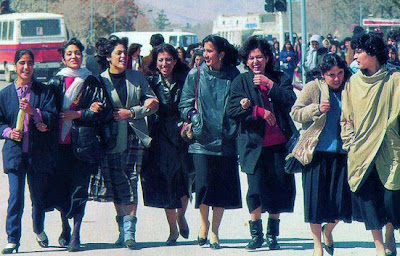 These days, the women look like walking clothes bundles. Their clothing is possibly designed to make them look as unattractive as possible as prescribed by the omniscient Taliban. 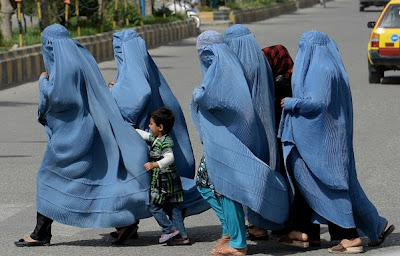 It can get depressing if you go deep into their history. I'm sure that no one expected, back in the 1960s that the state of their once proud nation would deteriorate to such levels.

The people did not elect or assign a mandate on the Taliban on a whim. It all happened because the Russians invaded, took over lands, made all sorts of rules and regulations, raped the women, stole from the men and generally made it an unpleasant place to live.

People then started moving out of there. It started steadily, but like a small stream and then started gushing like a torrent.

But the Soviet Union was defeated, and in place of them came the Taliban. Interestingly, Talib means 'student' and these guys were the students of Islam. The fundamentals of the religion. But their fervour was unchecked and they went overboard on the basics.

They probably thought that covering up their women was the solution to them not being raped. But in essence, it wasn't their skin that made them vulnerable, but the attitude of the invaders towards them.

They possibly thought that this invasion was a form of punishment by God for their past mistakes, so naturally, they outlawed homosexuality, sports, any form of entertainment including music, films, dancing etc.

Outlawing it does not mean that everyone adheres to the rules; it simply goes underground as demonstrated in The Kite Runner, where the childhood bully uses the little boy (son of the Hazara kite-runner) for his sexual pleasures.

It is sad to think of how nations can sink to such depths.
By Crankster at 15:48 2 comments:

Who Is Liz Adinan?

The truth is, I don't know. I've never met her personally or exchanged any two words with her.

She's described herself as a banker, dealer and a neutral market watcher, and from the photo on her Facebook site, she appears to be an attractive young woman with an equally good-looking husband. And she speaks fairly good English. At least she writes well.

The reason I brought her up is that I read something she had written on her site that just went viral. 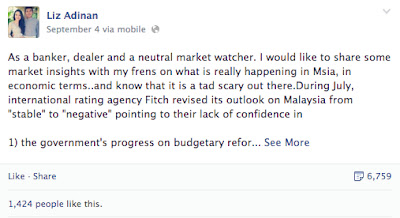 I read it because two of my friends had shared the post on their site as well. Both friends were non-Malays. They could have been friends of hers or have friends who know Liz Adinan.

More importantly, I want to highlight that among the educated and open-minded Malaysians, there is no longer hesitance in sharing a post, as long as it's well-written and makes sense, regardless of race or religion.

UMNO may moan about how Melayu akan hilang di dunia (some illogical prose about Malays fading away in oblivion), but the truth is, a Malay has nothing to fear, living amongst the same Chinese and Indians he has lived with for the past few hundred years for they are his brothers.

So to wax lyrical about how Tanda Putera is true history (when everyone knows it isn't) and that it should be taught in schools is not only insulting to the non-Malays, but also to the Malays.

Liz Adinan never expected her post to be shared by so many. In a subsequent post, she states it was 4000 and counting. When I took a screen shot of it on Facebook, it was at 6759 Shares and 1424 Likes. 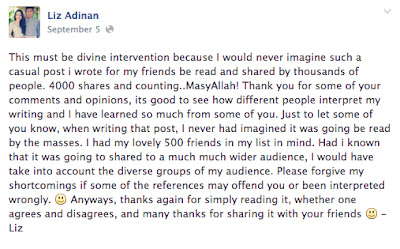 She talks about capital outflows due to lack of confidence from foreign investors causing the Ringgit to drop against the US Dollar. She points out how Bank Negara has revised the GDP to reflect a lower percentage (4.5-5%). And she mentioned the lack of action on the part of the government before the elections to counter the increasing trade deficits and debts.

Her warning is timely.

And yes, Malaysians of all walks of life are sitting up and paying attention -- because she makes sense.

Not because of her race/religion/gender.
By Crankster at 15:26 No comments:

What Is Progress? Or Even Regression ....

Iran wasn't always a backwater that persecuted its women and made them cover up.

After all, they are the nation that gave us Aladdin (of Arabian Nights) and the computer game Prince of Persia is based on that very nation.

Sure, they were different to most Arabs, in that they were Shi'ite Muslims, as opposed to Sunnis. And they also had another religion called Baha'i (lesser known, and apparently illegitimised in Iran -- but that is a different story altogether).

For the most part, the Iranians were very Westernised, having a ruler who had been educated in a Swiss boarding school and installed by the Americans (yes, the Yanks had to have their finger in that, too) and British.

The pictures below show young Iranians going about their daily life; perhaps some a throwback from the hippies of the 60s, but for the most part, a reflection of their times and their ruler the Shah, who was eventually deposed during the 1979 Iranian Revolution.


The students from Sharif University could easily be mistaken for students from Britain or America. Iran was a developing nation; which some say was on par with South Korea and Singapore.


But things took a turn for the worse. When the Shah (Mohammed Reza Pahlavi) was deposed, the mass support went behind a religious leader called Ayatollah Khomeini.


Today, the women of Iran look very different to those in the 1970s.

Some say it's progression, others say regression.

I think it's a cycle that afflicts nations that have corrupt rulers. The Shah came from a dynasty of rulers, his father was the Shah too before he was replaced by his son under the watchful eye of the Americans.

The new Shah was no better: he didn't understand the hearts and minds of his citizens. His father forbade traditional Islamic clothing, separation of the sexes and veiling of women in Iran.

That was not a good move for a nation that was prominently religious in nature. In fact, it is as equally invasive and oppressive as forcing women to veil or wear a burkha.

When the revolution came, the Shah was ousted by about 3 million Iranians who took to the streets. This was a rejection of poverty (not everyone in Iran was fabulously wealthy), of corruption, and of extravagance.

If you're wondering what extravagance is, the Shah's third wife (he divorced the first two because he had no male heirs) had a Yves St Laurent gown and Noor-ul-Ain Diamond tiara for her wedding.

I suppose that pales in comparison to what UMNO and their minions do to Malaysia by plundering its coffers, but then again, we are peace-loving Malaysians and not as hot-headed as the Iranians.

Shah Reza Pahlavi also grew increasingly brutal and autocratic when he realised that there was discontent among the Iranians. Freedom of expression was stifled.

The Iranians, on their part, had had enough of corruption and what they deemed as Western afflictions. They wanted someone noble and pious, someone who wouldn't rob them of their wealth or blindly do the bidding of the Americans.

Ayatollah Khomeini was their answer.

But like Afghanistan and their Taliban, when there is no "separation of church and state" or perhaps separation of religion and state, there is abuse of power and religious leaders impose their own wills.

And so, Iran is what it is today.

How about Afghanistan? Next up.