I was having a discussion with my friend Kenneth over the amount of tax that Malaysians pay.

Frankly, I was unhappy about having to pay GST or Goods & Service Tax in addition to all the other taxes we already have.

"GST is a good way of taxing the rich and relieving the poor," he told me.

I don't doubt that at all. In fact, I don't even have a problem with that system. Many developed countries that I've visited have implemented the GST and it works just fine.

What I have a problem with, is the government propensity to collect so much tax from the citizens.

We are a nation blessed with one of the most sought-after natural resources - oil, also known as Black Gold.

Most people don't know this, but it is estimated that Malaysia has a revenue of between RM2-3 trillion per year from the Oil & Gas industry.

Not millions, not billions, but TRILLIONS.

Folks, that is a lot of money. A lot of good can be done with it to improve the lives of the citizens.

But instead, the money is grossly squandered and sometimes unaccounted for.

Take the expenses of the Prime Minister's wife, for example.

There is no way in heaven or hell that we can justify such ludicrous spending. Let me highlight a few points:

- Rosmah’s official residence, Seri Perdana is undergoing a RM65 million facelift.
- Her visit to the USA was heralded by a centre-fold spread in the New York Times, which was estimated to cost about USD 5 million.

The author of the article above even has her own set of rather pertinent questions:

How many people were in her delegation? What were their official capacities? Who decided who should accompany her? Who picked up the tab? Did anyone accompanying her pay their own way? What gifts did she give the respective heads of state? Have members of her delegation declared their gifts to the tax authorities? What was her itinerary?

Rosmah started her three-day visit to Saudi Arabia on Jan 8. Then she flew home to prepare herself for Taib Mahmud’s wedding reception. The day after, she resumed her mid-east trip and spent four-days in Oman. Lastly, on Jan 19, she flew to Bangladesh for three-days.

Was it necessary for her and her delegation to go back and forth and waste resources?

Rosmah Mansur thinks that the national coffers at her disposal simply because she is the Prime Minister's wife. 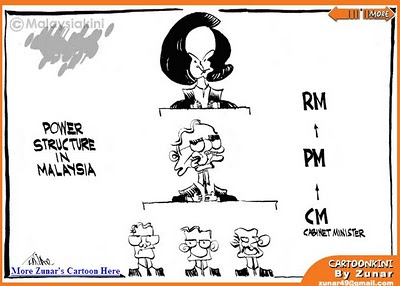 Meanwhile, the rakyat are still slogging everyday to make ends meet. To add salt to injury, they are required to pay taxes so that party-animal Rosmah can make paradise seem like the set of B-grade movie.

Isn't it time we do something about this sorry state of affairs?
By Crankster at 23:36 7 comments:

The Spelling Is Atrocious

The BN government has been busy with the upcoming by-elections.

As usual, the standard fare of bribing the constituency with money and other gifts has been employed.

To enhance the gameplan, an additional treat of flinging mud at the opposing party candidate is rampant. She has taken it in her stride though.

The propaganda machinery, Bernama, has been spinning furiously. Lies have spewed from every angle like vomit from a inebriated drunkard.

They have obviously been too busy to even check the spelling of their news items.

(click to enlarge)
Ah, the demands in the life of a prosti-journalist.
By Crankster at 21:49 4 comments:

Civil society groups and Selangorians have come together to form a Rakyat initiated effort called Hormati Suara Rakyat Selangor (HSRS) to demonstrate their disappointment and anger over the appointment of Datuk Mohd Khusrin Munawi as the new Selangor State Secretary.

This group, formed on January 11, 2011, will soon hold a public rally to pressure the Chief Secretary to the Barisan Nasional federal government, Tan Sri Mohd Sidek Haji Hassan, to declare Khusrin’s appointment null and void. At least 10,000 people are expected to participate in this public rally.

Khusrin’s appointment is a culmination of the relentless attempts by the BN federal government to frustrate the Selangor Administration in carrying out their policies and programmes.

The fact is Selangor Menteri Besar Tan Sri Khalid Ibrahim did not receive the recommended list from the Public Services Department. Since this have been revealed, it is only imperative that Sidek declare the appointment of Khusrin as null and void, as due process and convention was not followed.

HSRS’s maiden effort in organising this rally is to get the Rakyat to come together to voice their dissatisfaction on the current state of affairs and to show the many instances where the Pakatan Selangor Government policy implementation has been sabotaged by civil servants still loyal to their previous political masters.

At the rally, we will highlight the many instances where local issues for residents could not be resolved due the non-cooperation of the BN federal agencies such as Public Works Department (JKR), police, SYABAS, Social Welfare Department (Jabatan Kebajikan Masyarat) and the Housing and Local Government Ministry.

The issues that will be raised include:


The groups that form Hormati Suara Rakyat Selangor are:

* BERSIH 2.0 – a coalition comprising civil society organisations with the objective of campaigning for clean and fair elections in Malaysia.
* JERIT (Jaringan Rakyat Tertindas) – Oppressed People's Network
* SABM (Saya Anak Bangsa Malaysia) – a group committed to actualising the spirit and substance of Anak Bangsa Malaysia – "One People, One Nation"
* CONPAC – Coalition of NGO and Professional Councillors comprising councillors from all 12 local authorities in Selangor who are not members of any political parties and make up 25% of councillors.
* CGG - The Coalition for Good Governance comprises 55 NGOs involved in a wide spectrum of social justice issues.
* Malaysians for Teoh Beng Hock – a coalition of 52 groups echoing the call by Teoh’s family for a Royal Commission of Inquiry
* HAKAM – national human rights organisation
* GEL – Growing Emerging Leaders consists of a group of young people who study ways to apply leadership and faith-based principles in day-to-day living
* JIM (Pertubuhan Jamaah Islah Malaysia) – an Muslim-based group promoting development and peace
* Civil Right Committee, Kuala Lumpur & Selangor Chinese Assembly Hall
* LLG Cultural Development Centre Bhd - A non-profit organisation dedicated to uphold the principles of democracy, human rights and respect for individualities and ethnic diversities
* Malaysian Civil Liberties Movement – a group taking the lead role in realising our forefathers’ aspirations and encouraging the wider participation of civil society in shaping the future of our nation.
By Crankster at 20:19 No comments:

Email ThisBlogThis!Share to TwitterShare to FacebookShare to Pinterest
Labels: Rally

Not Suicide, Not Homicide, Then What? Accident? 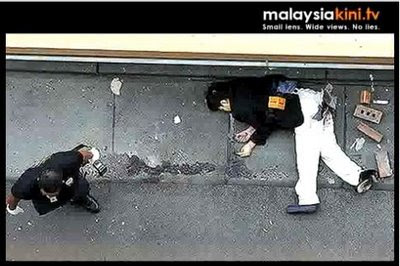 A lot of people are disappointed with the outcome but a bigger number appear to have expected that the MACC would go scot free.

Logically, it is shocking that there could be absolutely no evidence of what had really happened.

In a tight-security place like the office of the Anti-Corruption Commission, it is a little hard to believe that there were no security cameras, no CCTVs that could have shed some light.

My deduction is, those cameras actually spell the truth in over a thousand words and could potentially seal the fate of the MACC and consequently the government.

So all that footage had to be disposed off before it got into the wrong hands. It is entirely possible that the CCTV cameras were dismantled and put away for good measure.

Even if there was no homicide, there was a lot of wrong being committed over an insignificant little "corruption" case that no one really knows about or cares.

Evidence from expert witnesses showed that Teoh had suffered a pre-fall injury on the neck, which could have caused the deprivation of oxygen to his brain, resulting in loss of consciousness or disorientation.

It begs the question: Who inflicted that pre-fall injury? And why? Is that standard operating procedure in a Malaysian interrogation?

And yet, the coroner said, "After evaluating the evidence of the pathologists, I find that there is no sufficient evidence to confirm beyond reasonable doubt that this pre-fall injury did in fact facilitate, result or contribute to Teoh's demise."

Perhaps there may indeed have been insufficient evidence.

But I think in the minds of most Malaysians, the fact that even the coroner was unable to absolve MACC from its pre-fall guilt speaks volumes.
By Crankster at 19:15 10 comments:

I know there are heaps of you Malaysians who live abroad. This should interest you. 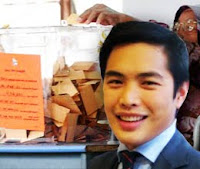 There will be a 'MyOverseasVote' briefing on Jan 2, 2011, specifically targeted at Malaysians who are back in Malaysia for the holidays, and for other supporters in Malaysia.

The session will be held with the assistance of Saya Anak Bangsa Malaysia and refreshments will be served after that.

For detailed information on MyOverseasVote, please click here or read this.

If you're attending, please email Ee Chia at eechia@gmail.com to give your name and contact number.

Kindly inform your relatives and friends too.
By Crankster at 11:28 1 comment: