When Governments Have No Guts To Stand Up To Bullies

Every nation has its faction of bullies.

These are individuals (and sometimes organisations) who have a sense of entitlement, that they "deserve" something or that the world "owes" them the "Right".

Often, these Rights may be constitutional and they cling on to it even if it is clearly wrong, irrelevant and outdated.

They don't care if it is at the expense of others. They still demand their Rights.

Only two years ago, a mentally disturbed young man by the name of Adam Lanza shot 20 young children and 6 members of staff at Sandy Hook Elementary school.

There were vows and promises by politicians that something would be done .... but nothing happened.

And then last weekend, another mentally unstable young man went on a shooting rampage, taking 7 lives including his own. The father of one of the victims speaks out:

I find this father's grief very distressing, not merely because he lost his twenty-year-old son whom he clearly loved, but because this was something that could have been avoided, by having more stringent gun controls.

The mentally ill killer should never have been sold not one, but three guns which he had in his possession and rounds of ammunition - which could have done far more harm that he actually managed.

Many countries, including Australia, Canada and the United Kingdom have amended their laws to allow for stricter regulations and limited gun ownership after tragedies involving guns.

But not the United States of America.

Oh no. The gun lobby in the land of the free is powerful and demanding. They do not yield an inch. They refuse to budge.

This is despite the fact that so many people in the USA are killed by gunfire. To make a point, this blog documents the number of people who were shot - in just one weekend.

According to the Gun Violence Archive, 7,145 people have been injured by gun violence in America and 4,123 have been killed since Jan. 1, 2014. That number includes 14 police officers killed, 447 children injured or killed and 331 instances of defensive gun use.

And yet, America continues to go about its way, seemingly oblivious to the obvious danger that guns pose.

All thanks to the gun lobby, the National Rifle Association or the NRA, who repeatedly quote the second amendment of the US Constitution which protects the right of individuals to keep and bear arms and angrily voice their dissatisfaction when gun control measures are proposed.

And even in the face of one father's grief, a gun enthusiast has this to say: "...your dead kids don’t trump my Constitutional rights."

Email ThisBlogThis!Share to TwitterShare to FacebookShare to Pinterest
Labels: Politicians

They Should Be Changed Frequently And For The Same Reason

The past few weeks have seen so much bickering, threats and racial tension in Malaysia's political landscape.

And then the Thomas Cup came along and united Malaysians again. 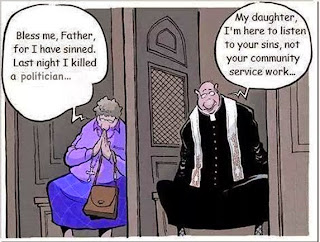 It's only the politicians who divide us. Full of $hit they are.
By Crankster at 08:38 No comments: