They Were Tear-Gassed Too... 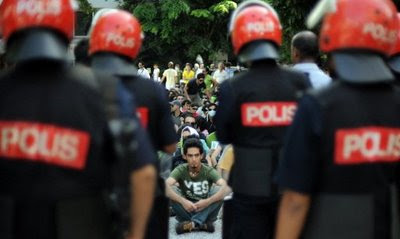 When it comes to elections, what do Malaysia and Iran have in common?

"We want all the countries in the world not to recognise Ahmadinejad as Iranian president. The election was fraud. The actual winner is (Mir Hossein) Mousavi," Ali Bozrgmer, a 28-year-old student told AFP.

No wonder the Malaysian anti-riot squad were in a hurry to fire tear gas on the protestors.
By Crankster at 04:03 3 comments:

There is a trash bag in town and he goes by the monicker of Awang Selamat.

Now I've heard people whinge, but no one comes close to this rabid mouthpiece of UMNO who regularly churns out a staple diet of racism, self-pity and a sense of entitlement.

If you're a foreigner who doesn't speak or read Malay, it looks like I'll have to translate - though what a despicable task it is to dissect such drivel.

But here goes the melodrama-punctuated snivelling:

Awang's heart is perpetually being gouged by the overly racist demands of the non-Malays post GE12 (on March '08). The reason can be interpreted. But Awang will not go into length on that, merely to bring up an excerpt from Tun Tan Siew Sin, an MCA leader, on 30th April 1969 for our consideration.

"The Malays, through UMNO, generously loosened the requirements within the law to the extent that in the 12 months after independence, 90% of non-Malays were granted citizenship. In contrast, pre-independence, 90% of them were not recognised as citizens even though they lived for over a hundred years under the imperialists. To repay the Malay generosity, MCA and MIC agreed to protect and respect the special rights of the Malays while defending the basic rights of other races."

It's almost amusing to observe how shamelessly he glorifies UMNO when every other Malaysian with half a brain knows that it was a coalition of people - not only UMNO - who had a say in national policy.

The British really didn't care who was a native or a foreigner. The Malays, Chinese and Indians were all equal in their eyes, which is why the whole concept of citizenship never mattered in the first place.

Galadriel rightfully takes offence at the insinuation that her life here is at the behest of the kind people of Umno.

There is some irrelevant reference to Tun Sambanthan, but after that, there's more rabble rousing in the next paragraph:

My 2 Cents slaps Awang The Moron right in the face with his response to this ridiculous comparison. "I could point out a country, that not only gave foreigners CITIZENSHIP, they even elected a dual-citizenship 'foreigner' as President," he says.

My resolve to translate the entire piece has weakened. Like any other piece with no merit, the writer chooses to repeat himself. But he ends with this:

The question is, has the Malays' sacrifice been betrayed by the other races?

Someone by the name of Ruyom has given a very good response to that particular question:

All the while their leaders shouted – traitor this and traitor that – as if the louder they shouted the more easily their lies could be believed.

Luckily there are a lot of Malay-Muslims in Malaysia who think for themselves, and not swallow everything Utusan tells them to. How stupid do Umno spin doctors think the rakyat have become?

Arrest Me - I Am Wearing Black!

I was wondering why Haris Ibrahim was keeping a low profile. I should have known better - he was busy hatching out a new plan.

And heck, this is quite a statement to be making! 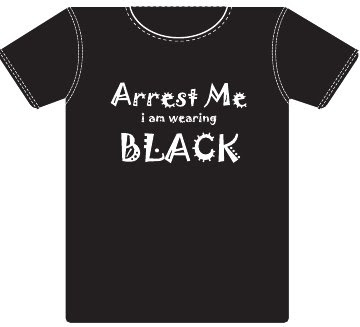 This initiative (as far as I know) was started by Wong Chin Huat, who subsequently got arrested for urging people to wear black on a designated day.

Since then, the colour black has become synonymous with political protest - at least in Malaysia. And yes, our nation can rightfully be termed as 1BLACKMalaysia, unless we stand up and make a difference.

Of course, this begs the question: Are we inviting to be arrested?

Even I, the rabid political activist wannabe, stopped short as seeing this t-shirt. It's bold and daring. And I can imagine it might be just a tad intimidating to see crowds of people walking about in it.

Just like Old Town White Coffee might be feeling just a bit of trepidation at involuntarily "hosting" the gathering of activists.

According to Lulu, two of its (Old Town) outlets have closed ostensibly for ‘upgrading’. It's the easiest way of avoiding a sticky situation - by closing down.

Because frankly, I can imagine the government coming down quite hard on Old Town for what will be seen as their "association" with political activists against the ruling coalition.

Of course, Old Town White Coffee can't turn away patrons for no reason beyond their choice of dress, but as an establishment with franchises throughout the country, it will be a difficult situation, nevertheless.

No matter. They will one day be hailed for being part of the change that is soon to come.

Email ThisBlogThis!Share to TwitterShare to FacebookShare to Pinterest
Labels: Freedom of Expression

They say wonders never cease. I'm beginning to believe them - whoever they are.

For finally, my parents have seen the light. Finally, they have realised that the mainstream media are nothing but a bunch of snivelling liars.

And believe it or not, my father has actually cancelled the daily newspaper subscription. I am very curious to hear of how he will deal with the withdrawal symptoms of not being able to read the comics and obituaries.

But according to my mother, he apparently was quite firm in his decision. I'm shocked because he was brought up to never question the government or authority, and by his book, the newspapers are the authority ... at least on news that happens in this country.

So for him to spurn the NST, there must have been more than just a ray of enlightenment.

I'm delighted. I hope that my father is not alone in his decision. I hope that all those others out there who read the mainstream media will consider cancelling their subscription as well.

But I think it has already happened. Which is why the NST is in collaboration with major hypermarkets to increase sales of their worthless scraps of newsprint by offering cut-out coupons with discounts:

PETALING JAYA: Carrefour Malaysia has teamed up with the New Straits Times to launch its week-long "Cut and Save Campaign" beginning today.

The campaign, which ends on Sunday, is aimed at ensuring that Carrefour customers enjoy the best deals, given current times when budgets are understandably tight.

Carrefour Malaysia and Singapore managing director Shafie Shamsuddin said three coupons offering savings of between RM15 and RM50 for selected items would be available daily in the NST during the campaign.

It is important to note that the flailing economy and "customer satisfaction" has been cited as the reason for this discount coupon offering.

If that was the case, they should have put it on the internet so people could print out the coupons and redeem them at the nearest outlet.

Oh no. This is definitely about increasing NST sales.

Email ThisBlogThis!Share to TwitterShare to FacebookShare to Pinterest
Labels: NSTP

Almost a year ago, I penned a rather sarcastic blog entry about elections in the UK and how they compare with the Malaysian scene.

I find it strange that back then when I posted this, I had absolutely no idea that a mere six months down the road, I would find myself in the UK - and in the midst of elections (this time, the European parliament) at that.

But so life goes.

Since then I've revised my views about the Green Party. They may have a strange leader in David Icke, but based on their manifesto, they seem to be a reasonable bunch.

Unlike the British National Party.

Now these fools are the British equivalent of UMNO, except they're not currently the ruling coalition. Yet.

You see, British MPs of late have been misbehaving. To cut a long story short, misappropriation of public funds by claiming all kinds of expenses, which is a big deal when people are getting retrenched and being made redundant.

Someone leaked out the news of this to the Daily Telegraph and it became a hot topic for discussion.

Of course, it's nowhere near the graft, corruption and misappropriation standards of good ole Malaysia, but people are angry nevertheless. Many are looking for alternatives, and suddenly the BNP is looking like a bright option.

The UK will regress about half a century if the BNP come into power. It will turn into Malaysia.

These rabid dogs are nothing but racist, blinded bigots. They are against immigration, Islam and multiculturalism. Heck, they even promote 'Rights For Whites' which is well.. the British equivalent of Ketuanan Melayu.

Do the Muslims deserve to bear the brunt of BNP's attacks?

Well, some do. The fact that the Finsbury Park mosque gave birth to and nurtured the extremists is testament to that. Heck, the BNP jumped on that window of opportunity and distributed fliers saying, "Maybe now it's time to start listening to the BNP".

But it would be unjust to say that Pakistanis and Bangladeshis are the source of the drug problem. And no, not all Muslims are trying to groom young white girls into their way of life. 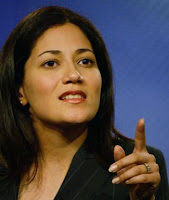 Muslim women may be a minority group, but some of them are the faces of television and significant pillars of the economy.

I don't know what would be the outcome of this elections. While people seem to be disillusioned by Labour and the Conservatives, there is still the Green Party and the Liberal Democrats.

The BNP is actively targetting the North West. I guess we'll just have to wait and see.
By Crankster at 03:40 2 comments: