Politics And The MH370

I was going to avoid blogging about this MH370 fiasco because it is a difficult situation to handle -- for any authority, be they some third world country or a purportedly developed nation (the kind that spies on its citizens but has atrociously third world banking technology).

But three things have annoyed me. Firstly, the Malaysian government has shamed itself and the nation by insinuating that the Captain of the ill-fated MH370 was an extremist for being a life-long member of PKR and a supporter of Anwar Ibrahim.

Now, I'm not Anwar Ibrahim's biggest fan, but with regards to Captain Zaharie, I believe that anyone who stands up for democracy and wants the best for his country is a man to be admired.

Unfortunately, this insinuation was picked up by a trio of pubic lice -- who probably regard themselves as 'journalists' -- for the Daily Mail.

Now, if you have ever been to the UK or are familiar with that trashy rag, you would know that it is read by the mentally deficient, those on unemployment benefits who believe the UK is overrun by immigrants but are too lazy to get off their butts and work for a living, and other random losers.

Still, it has managed to infiltrate the news circle of other serious journalists who are now calling Captain Zaharie's integrity into question. This really annoys me.

It also annoys Peter Chong who vehemently denies that the Captain could be involved in any mischief.

Interestingly, these are feel good moments despite the gloom surrounding the disappearance of this aircraft that Malaysians do have best friends of other races. Peter Chong was Captain Zaharie's best friend.

The third thing that bothers me is some fool from CNN called Jake Tapper who has a smug, slappable, babboon-like face who says, "Who would want to do this, to this part of the world, to this country, and who would be capable of such a thing?" 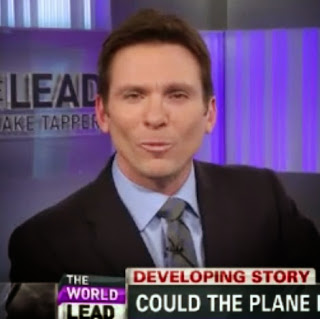 It's not what he's saying that is annoying, but how he says it.

I have a message for Jake Tapper:

Listen up, you dumb fuck. Your country, the one with crappy-banking-technology-but-superb-spying-skills-on-its-own-citizens (and ludicrously expensive healthcare) is not the only thing that is worthwhile in this world.

While you had your head buried in a hole or possibly trying to deal with the general incompetencies of your nation, other countries have emerged as economic leaders in their own right.

I don't expect you as an American to be able to comprehend that, as you probably have an IQ of 90 or 95, but it would be much appreciated if you could shut that flapping trap that sits on the front of your face and lubricates your jaws with saliva.
By Crankster at 14:29 No comments:

I thought Australia had completely gone to the dogs.

But it looks like there's hope, in the form of Senator Scott Ludlam of the Green Party.

A brilliant speech against fascism and bullying.

For more thoughts on this: Scott Ludlam has created the exact speech Gen Y was looking for
By Crankster at 14:00 No comments:

The KKK (KangKung Klan) aka ISMA-Perkasa coalition are back. And this time, they have "scientific research".

"Wow!" I can hear you say, "What is this research about, Crank?"

"Race and DNA," I offer, being extremely generous in my assumptions. "ISMA claim that they have found proof that the Malay genes existed before even the Chinese did."

"Where did this research come from?" you ask, somewhat suspicious (and with good reason).

Now I regret to inform you, dear readers, that I am not able to provide you with that information because I have no idea. I don't think ISMA have any idea themselves.

However, I can offer a bit of research on civilisations myself, based on what I have read and what is widely believed by scholars based on archeological findings. Take this map from Washington Post for example.


First things first: The world as we know it,started in Africa. Humans migrated from there to different parts of the world.

The map above shows the migratory patterns of how humans got to where they eventually lived and were found.

To suggest, as ISMA did, that Malay civilisation existed before even Angkor Wat is ridiculous.

It is possible for a Malay civilisation to have begun before Borobudur because the Indonesians would have had to pass through Malaya before getting to Indonesia and starting theirs, assuming they travelled by land.

However, there is no evidence of this Malay civilisation existing so long ago. Not in Melaka (as the history books crow about) or even in Kedah.

On the contrary, there is was plenty of evidence of Hindu civilisation even as far down as in Kedah, but the government has been anxious to destroy them. Extracts from the article:

A housing developer has demolished several temples sites, including an 8th century heritage site, in Bujang Valley, Kedah, and the authorities are not taking any action to stop the act...

...several ancient temples, called Candi, had been demolished in the last few years to make way for development ... the developer had now demolished the most famous 8th century temple remnants known as Candi Sungai Batu estate or Bujang Valley site 11.

The Malaysian government calmly destroy 8th century temples while the Europeans devotedly restore and protect their 16th and 17th century building and artifacts.

Yes, Malaysia outdoes itself in madness.

But they obviously have reason for destroying evidence: so that they can come out with ridiculous claims to support their assertion that they own Malaysia/Malaya and have the right to do whatever they want and invoke whatever privilege they can think of.

Unfortunately, no one seems to be buying into it.
By Crankster at 14:00 No comments: