In a move that is so lacking in originality, raw meat was again found outside a mosque in Cherok Tok Kun, Machang Bubok, Penang.

It has been sent to a fancy animal DNA testing facility in Sepang, but no prizes for guessing that the meat is pork.

The troublemakers are claiming that it was the Chinese who have thrown it into the mosque. 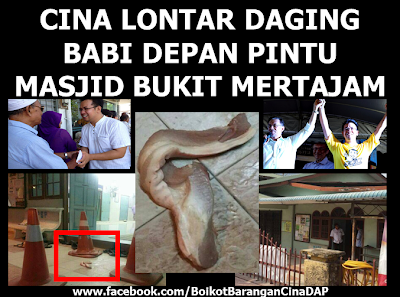 I beg to differ in opinion.

If there was any pork to be found, the Chinese would have cooked and eaten it.
By Crankster at 12:23 2 comments:

"Indians Are Their Own Worst Enemies"

Helen Ang has kick-started a very interesting (at least to me) topic about the plight of Malaysian Indians.

It all started out because an FMT reporter had a go at Waytha Moorthy, the chairman of HINDRAF or Human Rights Party.

To be fair, I am not impressed by how Narinder Singh manages to come off sounding patronising and condescending, by calling Waytha a waterboy and the "sole Indian fool" in the PM's Office.

A waterboy is someone who plays a small and perhaps somewhat insignificant role in fetching water for the "real" athletes -- the big boys who make a difference; who clinch the game. Urban Dictionary even defines a waterboy as an utter failure.

Now don't get me wrong. I don't think Waytha is a resounding success either. But I know what his game plan is. He has been trying to convince Pakatan Rakyat to do more for the marginalised Indian community.

However, much to his disgust (and mine), Pakatan Rakyat is more interested in fishing for votes than coming up with solid policies for the downtrodden and marginalised of Malaysian society.

So Waytha made good on his threat of moving over to BN, should they offer something better than what Pakatan Rakyat could come up with, which to begin with, was insignificant. Unfortunately, as I predicted, BN was offering up empty promises.

I suspect Waytha has had enough and consequently thrown in the towel; resigning from his post as minister in the PM's Office.

Helen has just one "simple" (in her words) question: So who is going to help, and how will assistance and poverty alleviation programmes be delivered to the poorest Indians now?

When I saw this question, I just had to jump to the comments section, because I knew there would be at least one brilliant armchair critic who would prescribe that the rich Indians should help the poor Indians.

This is ironic, especially when it comes from a Malay, because if one were to say, "Why don't we stop having ANY bumiputra privileges. Let the rich Malays help the poor Malays," they would be all up in arms and bleating, "Don't play with fire!!"

I didn't have to scroll very far to find the first comment:

Translated: If the responsibility of helping the Malays, Chinese, Indians, Iban, Kadazan, Sikh etc falls on the government, what exactly are "Samy Vellu, Tony Fernades, Ambiga, Ananda K" doing to help the Indians?

Now bringing Samy Vellu into the picture may be relevant as he was meant to represent the Indians. But why on earth would two businessmen and a lawyer be involved when they are largely private citizens and in no way holding public office? They are not responsible for anyone but their own businesses and families, and anyone who says otherwise merely brings scorn on themselves.

This ignorant comment came from someone who claims to be a teacher and I shudder to think what our youth are being imbued with, under the guise of education.

The funny thing is when the crime rate goes skyrocketing and just about every other person has a story about how they got mugged or knew someone who did, then Malaysians have no one but themselves to blame.

If you systematically marginalise an entire community, you breed resentment. You break their self esteem and motivation. And when they have no motivation, they put in no effort whatsoever to better themselves.

They turn to crime as a way out of their predicament.

It is not the job of a wealthy Indian to employ or feed a poor, marginalised Indian. It is the responsibility of the government.
By Crankster at 16:27 2 comments:

As with every other country in the world, the political scene in Malaysia is deteriorating into mayhem.

Some even call it a circus:

The current state of political discussion in Malaysia is becoming a "circus", and there is a real need to bring the political discourse back to pertinent issues related to living costs and economic hardship, Parti Sosialis Malaysia (PSM) said today.

Its Sungai Siput MP Dr Michael Jeyakumar said that the issues dominating the political scene - raised by both sides of the political divide, including the Kajang by-election, were not essential for the people.

I personally find that analogy a little optimistic, given that the lion-tamer in the circus usually has the lion under control.

A zoo, on the other hand, allows the creatures some leeway. There is an essence of unpredictability.

And frankly, a pride of lions could play a more useful role in disposing of unwanted politicians. 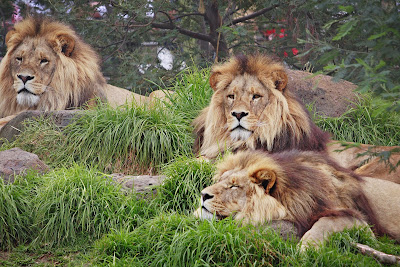