Snippets Of The Klang Valley Roadshow

Some of you may have missed the SABM Klang Valley Roadshow. I did. A close friend had her wedding dinner in Johor, and I was forced to choose.

After seeing this, I know I don't want to miss the Ipoh one.
By Crankster at 19:29 2 comments:

It's about the cradle and the grave. 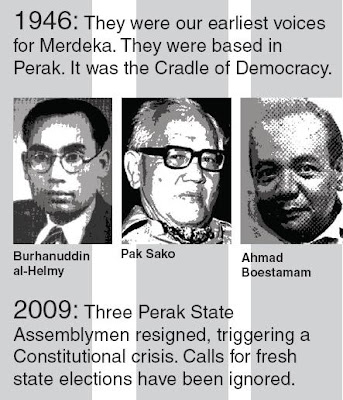 Saya Anak Bangsa Malaysia brings its Roadshow to the noble state of Perak.

Topics:
 the founding of the nation: the truth
Fahmi Reza
 human beings, all born free and equal
Jahaberdeen Mohd Yunoos
Azmi Sharom
 nation in distress?
 did we let it happen?
 this is my home. i care. i want to make it better.
Haris Ibrahim

It's a line-up of excellent speakers and it's coming right to your doorstep, folks.

Don't just bring yourself - bring your friends, family and pet turtle if you have to. See you there.

Just Grin And Bear It!

It is forbidden to burn churches here. 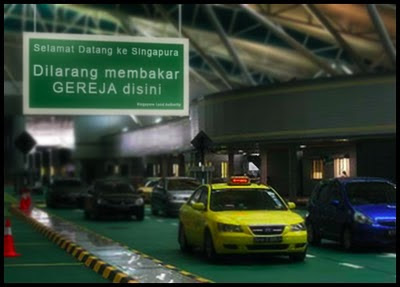 Fanning The Flames Of Religious Extremism

It looks like any other normal, quiet, peaceful neighbourhood, even today. 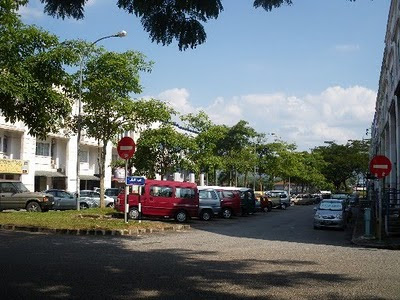 Except on the 8th of January 2010, that image was shattered as home-made firebombs set the corner section of the shoplots ablaze, severely damaging the building and its interior. 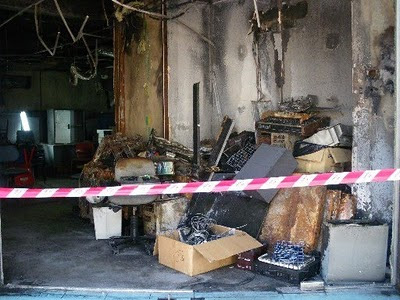 What made that building (and specifically that lot) special was that it was a large, prominent church in the Desa Melawati neighbourhood.

According to one of the church members, Metro Tabernacle has a membership of 1700 and they have occupied that particular spot for the past 12 years. There have been no significant incidences prior to this.

This church was the first to become embroiled in a controversy revolving around the usage of the word, "Allah" in the Christian context.

Religious fanatics, displeased with the court ruling that allowed The Herald to use the word, employed terrorist methods in an attempt to intimidate. 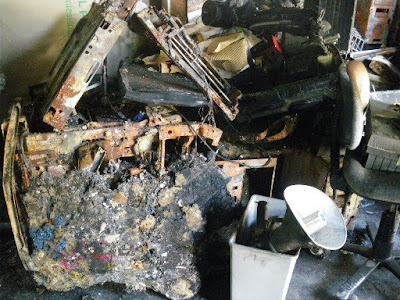 It came at a price for Metro Tabernacle. The damage is estimated to run into more than a million ringgit. The members have been forced to relocate for their regular services. 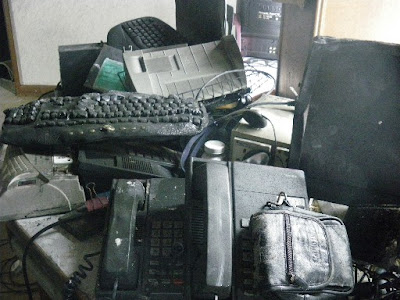 Heaps of expensive equipment was damaged beyond repair.

But I suspect even *that* was not as damaging as knowing that someone - a fellow Malaysian - could needlessly and heartlessly destroy the place you once regarded as home merely because he disagreed with you.

Or because it served a political purpose. 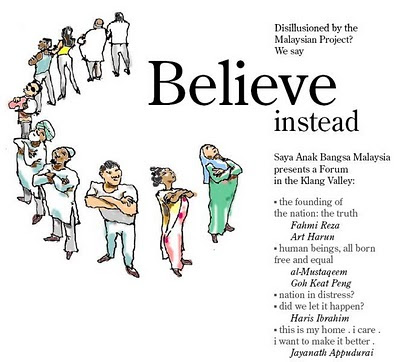 Great line-up of speakers and interesting topics in the works, people. Don't miss it.

More details can be found HERE.
By Crankster at 01:08 1 comment:

I got this SMS right after the first few arson attacks on churches:

I didn't bother to respond.

I know I'm going to get mindless drivel about how wonderful the government is at promoting racial harmony.
By Crankster at 20:37 4 comments:

It comes as no surprise that we have made it on CNN - again, for all the wrong reasons.

If you haven't been following closely the developments in Kuala Lumpur, the high court ruled last week that the Herald weekly (a Catholic magazine) had the right to use the word "Allah", after a long-running dispute with the UMNO government who banned it for 3 years.

It shocked Jihad Watch, the rabid, froth-at-the-mouth anti-Islam group but the bastards had the last laugh. Unfortunately.

Well, after 5 churches and 1 school being firebombed by the extremists - the Metro Tabernacle, the Church of Assumption, Life Chapel, Good Shepherd Lutheran and All Saints Church in Taiping - Malaysia's reputation as a "moderate Muslim country" has gone up in flames. 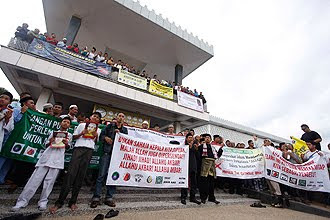 It evidently escapes these village idiots that the Catholics are using the word "Allah" to refer to their God, so at which point are they "making fun"?

SABM and a few other civil initiatives have strongly condemned the cowardly acts.

But UMNO is desperate. They will stoop to anything just to stay in power (and I suspect regaining control through emergency rule), even if it means wrecking this country apart.
By Crankster at 20:34 5 comments:

This morning when I was listening to the news on the radio, it was implied that PAS was very much against this issue of Catholics using the word "Allah" to refer to God.

Upon reading Harakah, I have discovered (and straight from the horse's mouth) that this isn't the case at all.

PAS has no issue with Malay-speaking Christians using the word "Allah".

In fact, the article goes on to explain that UMNO is milking this issue for their own political benefit.

They need the support of Malays badly and they will stoop to anything to get it. 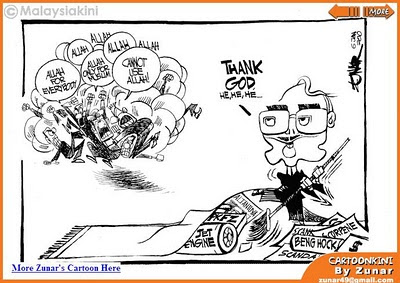 It also makes for an excellent distraction from the serious problems plaguing our country.

While the citizens are busy fighting between themselves over this trivial issue, the politicians are busy getting their hands dirty.

So, if any of you got that false impression about PAS, as I did - now you know.

The Saya Anak Bangsa Malaysia team has a New Year message for you.

We'll need every prayer to make every change that's needed.
By Crankster at 20:58 4 comments:

Most of you wouldn't even deign to sniff pertly at the New Straits Times. I say good on ya!

Since the mainstream media became slaves of the ruling coalition, we have lost any semblance of decent journalism. Instead we are subject to the diatribe of spin doctors, some of whom are not particularly even talented.

This piece by Azmi Anshar is one such example:

Cyber anarchist with a belligerent agenda

Unsurprisingly, it attempts to vilify RPK and condescends to belittle his readers. I will not hold it against you if you ignore the article entirely.

But it makes me wonder why an entire article was devoted to trying to discredit a blogger in the beginning of the year when there could have been words of motivation for the nation?

What made the blogger in question so popular anyway?

Could it have been that what he said made sense in the first place?

But UMNO will never look itself in the mirror, preferring instead to sweep under the carpet all its shortcomings.
By Crankster at 13:35 3 comments: