The promise of access to censored stuff certainly clinched my presence at the KL-Selangor Chinese Assembly Hall.

I didn't stay for the entire session, but I certainly wasn't disappointed with the offering either. It confirmed a lot of things which I had suspected about government censorship - the whole harassment and banning routine which is the hallmark of a dictatorship government.

Young talents like Sharon Chin told their side of the story. She had researched it in depth and she knew her stuff.

More info on her exhibitions and the government shenanigans can be found at her blog.

To date, about 1446 books have been banned in Malaysia.

But it's not just the books that get banned - movies aren't spared either.

I did a series on the morality police in 2007 and touched briefly on Amir Muhammad's latest offering then, a movie called The Last Communist, which loosely depicted the life of Chin Peng, the Malayan communist leader post WWII.

What was notoriously spectacular is that the movie was banned for having insufficient violence. I credit the civil servant who had that brainwave.

There are legitimate reasons why you should not wash down your morning packet of nasi lemak with a substantial mug of milo-ais-kao-kurang-manis, even if that routine conjures up a gastronomic delight.

This is one of them, especially if you're a civil servant.

The excuses may seem funny and we may dismiss it as standard government stupidity.

But at some point, our rights to have access to those books and movies are being violated by those who deem themselves as the guardians of our minds and morality. 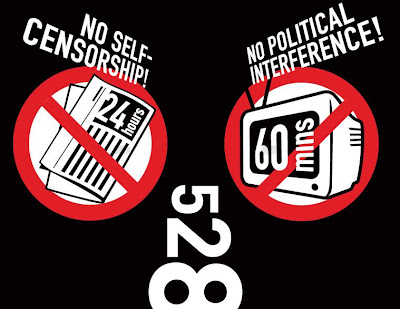 Frustrated with CENSORSHIP & POLITICAL INTERFERENCE in the mainstream media?

SAY
NO to Political Interference!
NO to Media Self-Censorship!

For more information, go to the blog!
By Crankster at 20:59 3 comments: 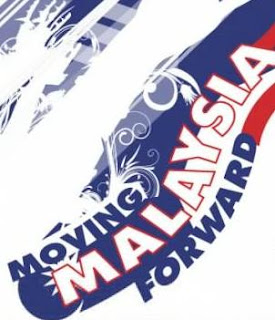 I obviously picked the right session to show up for the BUM 2010 event yesterday.

You know how I thrive on controversy.

Controversy was exactly what I got in the form of P. Uthayakumar, founder of HINDRAF, and now Secretary General (pro tem) of Human Rights Party (HRP) who even obligingly concluded that "bloggers have all become victims of sectarianism and ethnocentrism" in Malaysia.

HRP has positioned itself as a party focused on fighting for Indian rights. It seems a bit rich to accuse everyone else of being sectarian or ethnocentric.

However, it is evident that Uthaya and HRP do not have exclusive monopoly on controversy. Malaysiakini appears to want a slice of the pie as well - at least it certainly appears that way, based on the overly sensationalised article on the event.

Fight? Please, it wasn't a fight by a long shot. Perhaps a heated exchange, a fiery dialogue or a number of other descriptions. But fight?? What is Malaysiakini trying to prove?

N.Ganesan (HRP advisor) refutes the description in Malaysia Today, claiming (perhaps unfairly) that Malaysiakini slants news as much as Utusan does.

But perhaps Malaysiakini should consider impartial reporting instead of playing up to the gallery like it has in this case.

PUTTING an opposition leader on trial inevitably carries a whiff of politics. When that leader is Anwar Ibrahim, and the charge is sodomy, the same accusation used in 1998 to wreck his political career and confine him to jail for six years, the whiff becomes a stink. Mr Anwar, a former deputy prime minister, is playing a familiar role in “Sodomy II”, as the newest case is known. He is in the dock again, but in the court of public opinion it is Malaysia’s judiciary and its political masters who face the judgment of a sceptical nation. 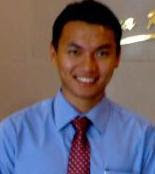 On May 10th the defence began its cross-examination of a former aide to Mr Anwar, Saiful Bukhari. In February he testified that Mr Anwar sodomised him in a borrowed flat on June 26th 2008.

In Malaysia “carnal intercourse against the order of nature” is punishable by up to 20 years in prison, even between consenting adults.

A conviction would automatically bar Mr Anwar from politics for five years and send his parliamentary coalition into disarray.

Mr Saiful, now aged 25, is the prosecution’s star witness. Karpal Singh, the doughty chief defence lawyer and an opposition MP, began by asking about Mr Saiful’s acquaintance with the prime minister, Najib Razak. Mr Anwar’s team claims that a political conspiracy has been undertaken to discredit him. The government denies it strenuously. But the circumstances of Mr Saiful’s accusation remain murky.

Mr Saiful has told the court that he went to visit Mr Najib, then deputy prime minister, at his house on June 24th 2008—two days before the alleged incident—to talk with him about his own troubles. That an ordinary citizen should have been granted such access has stoked suspicions. On the very same day, Mr Saiful went to see a police officer who played a key role in “Sodomy I”. Later, according to Mr Saiful’s testimony, he spoke by phone with Malaysia’s senior cop. How did he get the number? asked Mr Singh. Overheard it from Mr Najib, came the rather feeble reply.

Other questions touched on the findings of the doctors who examined Mr Saiful. Two days after the alleged molestation, they found no sign of penetration. Another doctor wrote that the witness had inserted a plastic object into his backside. “Nothing wrong with your anus. Why all this fuss?” asked Mr Singh, crossly. Challenged over the medical reports, Mr Saiful protested that he could not see his own anus. The judge concurred.

Malaysians have grown used to such smut in the courtroom. Mr Anwar’s first trial featured a crusty mattress that the prosecution said was stained with his semen, proof of sodomy. Mr Anwar was released in 2004 only after it was ruled that testimony against him had been coerced. Four years later, as Mr Anwar prepared to stand for office again, with hopes of toppling a shaky government, Mr Saiful joined his campaign as a volunteer. Whatever the merits of his complaint, it is hard not to suspect a political hand at work. Mr Singh seems determined to reveal whose.

The trial has proved a distraction for Mr Anwar. His party has suffered a string of defections and lost a recent by-election. Another by-election looms in the important state of Sarawak on May 16th. The trial has forced Mr Anwar to cut short his campaigning. He has managed to keep up his foreign jaunts though, staying on the international stage, and chiding Mr Najib’s government for having hired an American lobbying firm to raise Malaysia’s profile.

In 1998, when Mr Anwar was first taken down, his supporters thronged the streets. Reactions this time have been more muted. Foreign governments took a dim view of Sodomy I; America’s vice president at the time, Al Gore, said it “mocked international standards of justice”. Twelve years ago Malaysia was teetering on the brink of financial ruin, and nervous foreign investors looked to Mr Anwar as a safer pair of hands.

Fearing a power grab, the prime minister, Mahathir Mohamad, sacked his uppity deputy and imposed capital controls. This time Malaysia’s finances are in fairly good shape and it is the rich world that is fretting over deficits. It may find less to say about Sodomy II.
By Crankster at 21:42 8 comments:

A Victim Of Popularity

Even heckled by those who are less willing to suffer fools gladly. In short, he's a victim of popularity.

How distressful it must be, to be so .... popular. Especially when one is defending Malay rights, as per the Constitution.

We all know how downtrodden the Malays are, and how Ketuanan Melayu is taking a backseat to significantly less important matters like the economy, for example.

The very nerve of Malaysian citizens to neglect their priorities.

But not Ibrahim Ali.

With renewed strength and fortitude, he plows on, like an impotent but well-trained kerbau in the sprawling padi fields of Kedah.
By Crankster at 22:43 3 comments:

My apologies- I should have put this up earlier.

The KL one is over, but coming soon are the Penang, JB and Ipoh ones. 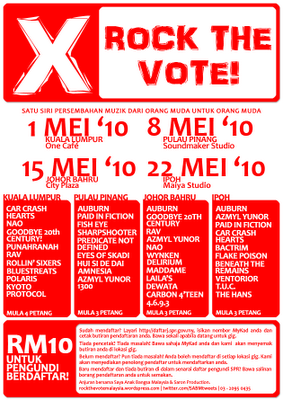 Email ThisBlogThis!Share to TwitterShare to FacebookShare to Pinterest
Labels: Music

I don't know why organisers even bother specifying a location for any rally. It always gets cordoned off anyway. 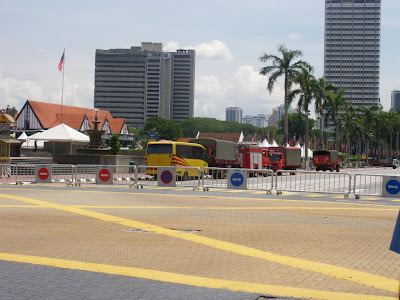 But the crowd had relocated to the Chinese Assembly Hall carpark, and that's where I found them. 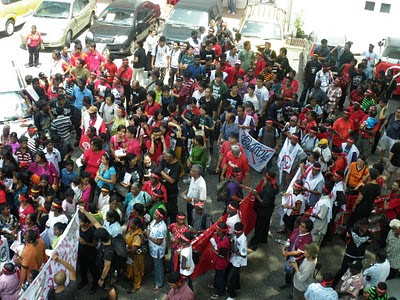 Some of the usual suspects were there. 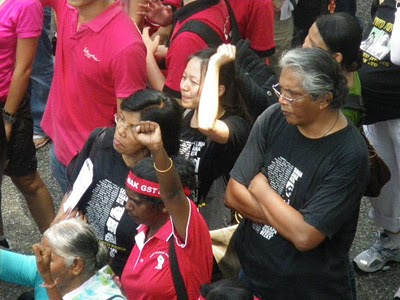 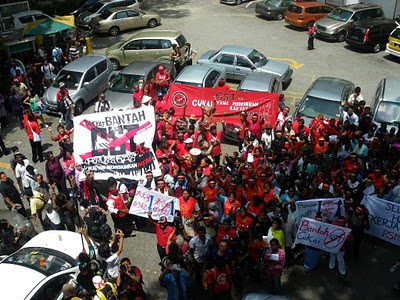 And some colourful banners were flashed about. 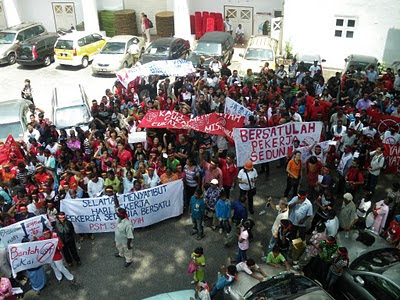 The turn-out for this event wasn't at all spectacular, though it was good to see that Malaysians are gaining courage in coming out to voice their dissatisfaction.

UPDATE: Six people were arrested over the protest