You know what still bothers me in this country?

Occasionally I meet up for a chat with old friends about current events. Sometimes, the conversation steers to foreigners in this country.

Not the privileged ones. (You know, the white type.)

No, usually the disparaging comments are reserved for the Bangladeshis, the Nigerians and sometimes, the Indonesians.

The originators of such comments are frequently the same people who complain about being unfairly selected for discrimination.

I point out, that if they didn't like being discriminated against, perhaps the foreigners don't either.

This earned me blank looks, as if I was preaching an utterly foreign concept. No pun intended.

Perhaps this Merdeka, it might be a good time to reflect on how we perceive others, and how others may perceive us.

How will we change as a nation, if we can't even change ourselves?
By Crankster at 20:47 No comments:

Email ThisBlogThis!Share to TwitterShare to FacebookShare to Pinterest
Labels: Racism

I have, in the past, criticised the political parties who fall over themselves to woo the majority, while ignoring marginalised minorities.

I am pleased to note that this is changing.

Turns out that Gobind Singh of DAP (MP Puchong) and Dr Mariah Mahmud of Parti Amanah (ADUN Sri Serdang) are jointly organising a registration drive for Malaysians who have issues with citizenship legalities.

It's held today and tomorrow (17 & 18 August) so if you know of anyone who needs help, please direct them to this. 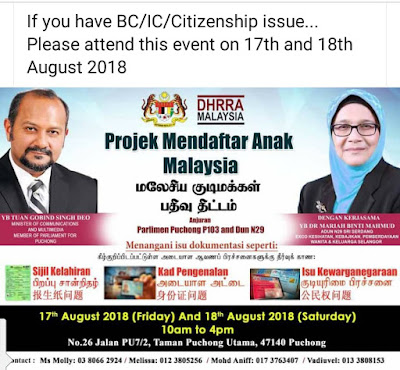 This has been an ongoing issue for years and has exacerbated within the past 10 years.

My previous blog posts can be found here:

1. Stateless
2. Trying To Obtain A Birth Certificate
3. No Identification Is A Violation Of Rights
By Crankster at 09:09 No comments:

Following my last post, I observed that the origins of the Malays was discussed again.

The Malay Mail covers the views of an extremely dubious historian regarding the origin of Malays, during her speech to Muslim Youth Movement of Malaysia (Abim).

This is the Abim, who are notoriously intolerant of non-Muslim opinion.

Among the more ludicrous claims:
1) Malays have the second oldest ethnicity in the world.
2) There was a migration by some of the shortest people from Africa to Sundaland (SEA)
3) The ancestors of the Malay people are the Semang and Senoi

Zaharah Sulaiman is the same historian who elicited a lot of laughter approximately 10 years ago with the same (or similar) spiel, so predictably, this latest assertion was absurd as well.

Since then, the researchers from the Human Genome Organization (HUGO) which was quoted as the source of said historian's research has come out to say that they find the article to be, "highly misleading and erroneous. The contents are absurd, fictitious, and any content claimed to our research is complete misrepresentation."

Read the article for yourself to understand the facts. I concede that genetics might be difficult to understand, but I managed and I only have Form 5 biology to help me through.

What really annoys me is the whining defeatism of some UMNO types. I won't deny that there are ar$eholes among the non-Malays who try and look down on the Malays due to some undefined sense of superiority.

It doesn't help when Zaharah Sulaiman rants about how a Chinese “invasion”, backed by foreign Western powers at times, has since stripped the ancient Malay peoples of their riches and knowledge, causing their descendants to be inferior to other races.

Now, the words 'superior' and 'inferior' get my goat. I have never considered myself inferior to anyone, and I strive not to feel superior to anyone else. We should be judged (if you will forgive the cliché), for the content of our character.

To begin with, the bloody Indians were worse invaders back in the 12th and 13th century. From Wikipedia:

In 1025 CE, Rajendra led Chola forces across the Indian Ocean and invaded Srivijaya, attacking several places in Malaysia and Indonesia. The Chola sacked Kadaram (the capital) and Pannai in Sumatra and Malaiyur in the Malay Peninsula. Rajendra also invaded Tambralinga and the Langkasuka Kingdom in modern Malaysia and south Thailand.

This invasion led to the demise of the Srivijaya kingdom, FFS!

And Zaharah is moaning about how Chinese came over, stole minerals, got free education and amassed wealth illegally. Indians did that too -- just much earlier.

The issue is what you do in retaliation. Many Chinese and Indians come from underprivileged families; with determination and grit, they get into universities and colleges and go on to forge successful careers.

I concede that we do not suffer as much as African-Americans do with racism. While there are the occasional racists amongst Malays, for the most part, as a majority, the Malays are respectful, cultured and dignified.

Which is why it bothers me that their own race still regard them as inferior, because they are anything but. Given that they are a mix of Chinese and Indian gene pools, I would look upon them as having hit the genetic jackpot!

Having worked with many Malays in the past, I have found them to be anxious to please, eager to learn, willing to work hard -- all traits of excellent team members. The key is in learning how to motivate them. Clue: it's NOT by issuing threats.

Also, the crowd I work with are well-educated and mostly self-motivated, so I clearly have better material to work with.

I want them to be successful. I have had Malay mentors who helped and taught me, and I am more than happy to pay it forward.

But it is really difficult to make progress when a culture of defeatism is ingrained in them, and when their only claim to fame is that they are bumiputera from Tanah Melayu.

Related: Contesting Malayness
By Crankster at 12:02 No comments: