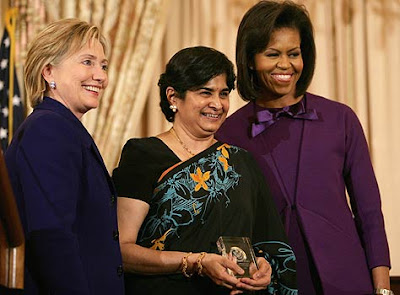 I always knew Malaysian women were something to be proud of. Don't get me wrong, I love Malaysian men as well (and I don't want to start naming names because there are so many great fellows, both famous and relatively unknown).

But Malaysian women have the knack for being firebrands.

Ambiga Sreenevasan has yet to be jailed (as far as I know) but she has managed to promote what is right through her influence and standing as the president of the Bar Council of Malaysia.

I swell with pride when I see her standing next to Michelle Obama and Hillary Clinton to be recognised for the courage that she has displayed.

Ambiga could possibly face what Irene Fernandez has been put through for the latter's expose on human rights violations on refugees.

Just soon after becoming president of the Bar Council, she organized the “March for Justice,” (or what we call the Penguin March) in Putrajaya, calling for judicial reform and investigation into V.K. Lingam's now infamous judge-fixing video.

For her efforts, she has received hate mail, death threats, and had a Molotov cocktail thrown at her house.

She organised a forum on religion, at the risk of incurring the wrath of religious fanatics and conservative members of government. They protested at the Bar Council building and called for her arrest.

Oh, she has courage indeed.

You see, in Malaysia, we need the intellectuals to speak up and put forward their opinions. Heck, even stand up for it. It's not an easy thing to do, to speak up against the establishment.

She did it and is rightly awarded Woman Of Courage.

I applaud her recognition and support it wholeheartedly.

But really, it shouldn't be considered something extraordinary. If you and I, and people like Ambiga don't do it, we will only have ourselves to blame for not standing up to the bullies.
By Crankster at 14:40 5 comments: 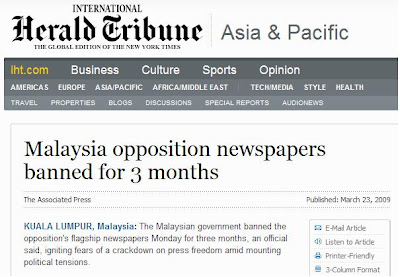 It tried to ban Malaysia Today - violating internet censorship rules - but it only succeeded in promoting the site to those who hadn't heard of it.

And those of us who *had* heard of it? Well, we redirected our readers to the mirror sites that popped out within hours of the ban.

So now they try to ban Harakah and Suara Keadilan for the next 3 months - the important moment for BN where it can endure no opposing views or that of a critical nature.

Will that work? You tell me.