Not for the first time, the 1MDB fiasco is being overshadowed by the the MH370 news: Malaysia Confirms Flight 370 Course Was on Pilot's Simulator.

On Thursday, Transport Minister Liow Tiong Lai told local journalists that the flight path was found on the simulator. He also cautioned there were "thousands" of destinations on the simulator and no evidence that Zaharie flew the plane in that area or deliberately crashed it. 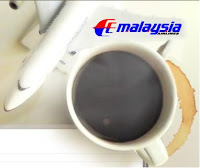 I think the captain is being thrown under the bus, with the option of retracting the accusation, should it not become necessary anymore.

Aviation blogger Jeff Wise notes that some numbers and data do not match.

I personally think it's been cooked up.

The reason I say this is because if someone was on a suicide mission, they wouldn't meticulously plan the details of their death, and certainly not on a flight simulator which was a passion of Capt Zaharie. Depression and passion don't mix.

Now, if he was homicidal, on the other hand, and out to kill as many people as possible, you'd think he'd at least state his reasons for the attack on other humans. At least leave a note. Even bloody ISIS knows how to do that.

I believe this guy.

It appears to me that the Malaysian government is yet again using the MH370 to distract people from the dirty issue of funds embezzlement.
By Crankster at 06:03 No comments: