How To Rig An Election

This is by far the dirtiest election yet.

We have had the sabotage on the banners, buntings and other campaign material. And then we've had the sexist stuff (courtesy of the Seputeh wannabe). Not to mention, the mainstream media is furiously churning out coverage favouring BN.

But this one takes the cake. 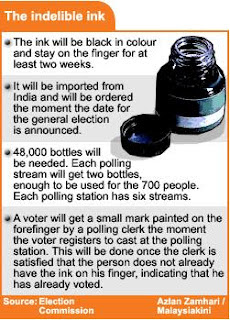 BERSIH, in its memorandum to the YDP Agong had stipulated that the election commission enforce the use of indelible ink to dye a voter's finger to ensure he or she cannot attempt to cast a second ballot undetected.

The commission responded that it had plans to in fact, implement this procedure - saying that it would buy approximately 48,000 bottles of indelible ink worth RM2.4mil from India.

All illusions of a free and fair election were attempted, just to humour BERSIH, the Opposition and the voters.

But there is no room for illusions now. Barisan Nasional is desperate. They are losing like never before.

The speeches by the Opposition are being attended and applauded with vigour and support. And BN knows it is bad news for them when even attempts to lure voters by using celebrities don't work.

So the cheating machinery is put in gear.

Just 4 days before the voters are due to hit the polling booths, the election commission has cancelled the use of indelible ink, citing - get this - public order and security reasons!!!

According to the (overaged, undersmart and should-be-retired-to-greener-pastures) election commission chairman Abdul Rashid, there were also reports made to the police confirming that certain irresponsible quarters had purchased indelible ink from abroad with the intention of creating confusion and suspicion as to the status of voters.

You mean you can buy indelible ink so easily, like at the pasar malam?

For the love of God. Was that the best excuse they could come up with??

Even I could give them some better suggestions for cancelling the use of indelible ink:

1) Produce surveys/statistics showing the majority of Malaysians are allergic to indelible ink, which causes them suffer from urges that require copious dosages of viagra.

2) Display some random Malaysians with fungus growing on their fingernails that closely resemble indelible ink (and thus causing confusion).

3) Prove that space aliens on UFOs have concrete plans to smear indelible ink on fingers of Malaysian voters on the night before polling day (maybe that's who the "certain irresponsible quarters" are).

I am utterly disgusted. I am pissed that these f*cktards are conspiring to cheat and lie to my face. I am enraged that ass-wipes actually think that I don't know that they are plotting to commit massive fraud.

I feel insulted that BN and the election commission think I'm so stupid not to know what they're up to.

These are the people I have allowed to rule my country.

This is even more reason for me to vote for change.