It Ain't Over Til The Fat Lady Sings 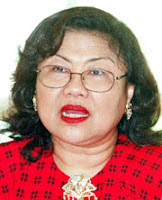 There was a whole lot of speculation on the outcome of the cabinet line up.

But no one expected the fat lady to be elbowed out.

Well, she certainly had a big mouth and an incredibly domineering personality to boot.

She appeared to take delight in telling her detractors exactly what she thought of them.

Thierry Rommel, (former EU envoy) has been dismissed as having an "attitude problem" and Michael Backman was told in no uncertain terms that she did not care about what he said.

Unsurprisingly, she did manage to gain the attention of foreign correspondents.

Perhaps the length of her service in the government had them thinking she was a permanent fixture in the parliament. Her departure obviously has them surprised. 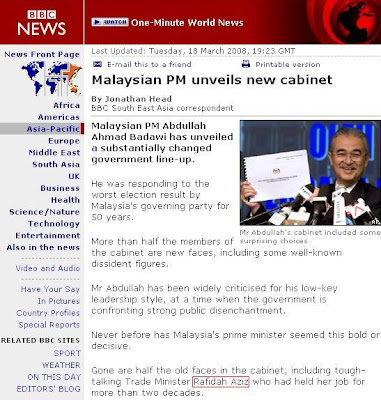 John Burton of Financial Times refers to her as old-guard.

I think we can all agree our corrupted AP Queen deserves to be retired to green pastures (and I'm being kind here) but I'm just wondering why Abdullah chose to drop her while maintaining Nazri Aziz and Muhammad Muhammad Taib, two buffoons known for their unrestrainable motor-mouths.

At least Rafidah Aziz, in spite of her blind advocacy of the NEP, was reasonably competent in her field, having both the knowledge and enthusiasm for trade & industry to bring Malaysia to the forefront.

Here is the latest blog created by my conscience ...

RAJA MONGREL @ http://rajamongrel.blogspot.com/
Creating An Absolute Monarchy In Malaysia Based On Royal Supremacy

Hear me confess: My Lies, My Plots, My Hypocrisy … Things that you can never find at my official site @ Malaysia-Today.net

Maybe AAB will make her an advisor on APs? :)