It was some time back when I was messing around with my Friendster account that I stumbled upon an old classmate from secondary school.

We decided to catch up for old times sake.

And I discovered that in spite of our typical Malaysian education, both of us had developed an intense desire to make this country a better place.

Today she is a video journalist with malaysiakini.tv - the only independent news channel we have. 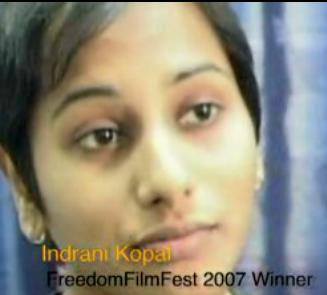 About a year back, a mutual friend of ours invited me to the KOMAS FreedomFilmFest, incidentally, the same one Fahmi Reza won for his 10 Tahun Sebelum Merdeka.

Fahmi's piece was timely and very succinct, especially with our rather turbulent political undercurrents. He thoroughly deserved his win.

Indra's documentary “She’s My Son”, is still very controversial for our society to accept. She came in second place after Fahmi.

Back then, Indra gave me a copy of this documentary on a CD which I still have today. I found it disturbing then for various reasons, and still do now.

But as with a lot of her work in malaysiakini.tv, she digs up some very nasty but pertinent stories which need to be told.

She was recently nominated for The Asian Youth Ambassadors (AYA) Dream Malaysia ‘Most Outstanding Youth’ Award.

AYA seeks to give recognition and to reward young individuals (aged 18 – 33) who have overcome and may still be overcoming obstacles in their lives to be where they are today.

I think Indra deserves to win this time. If you can spare RM0.80, please vote for her.

Email ThisBlogThis!Share to TwitterShare to FacebookShare to Pinterest
Labels: Non-Political

Yup! I agree with you. She deserves to win. Most admirable that she managed to overcome the obstacles in her life to get to where she is today. Have already voted :).

Thank you. :) I really appreciate it.

Went to the link and saw the documentary. It was excellent: told with such simplicity and matter-of-factness, when it is neither simple nor matterofact!

What an exceptional woman to have had the courage to let her son do what he needed to when he had no other choice. And she supported him every step of the way. How cool is that? Love with no hang-ups, and no 'what will people think?' nonsense. An excellent role model for most of us.

I just voted for Indrani :)

Thank you for posting this. It warmed my heart.

Me cannot vote thru sms. :( Can send US dollars. Just found some from my stay over there. Wondering whether they are still worth anything ...

Indrani is indeed an exceptional woman. What about you, crankster?

You got more brains than all the Hindraf 5 put together, dare you go into politics and be just as exceptional? :)

Pat, what I like about Indra's talent is that she never finds the need for sensational reporting.

And yes, I'm quite aware that 'what will people think?' can be a very important factor. Indra interviewed a lot of women before she found one willing to talk about it in public.

Rox, I'm no politician. :) Why would I need to be in politics to be exceptional anyway? ;-)

I couldn't upon my life think of anything anyone could do that could be more exceptional than saving a country without hope. :)

I remember that Oprah Winfrey was once asked why she'd never run for president. And her reply? That she could do more work outside of politics.

I think she is right. You (and the rest of us who tumpang sekaki ;) should stay out here and keep rattling their cage!

Oh wow ... I was informed about the posting yesterday by one of Crankshaft's fan who is also my colleague in Malaysiakini.

Thank you so much for the kind words and support Crankster... and for those who have voted, thank you, thank you so much...I am so overwhelmingly honored to be listed among all the other great achievers who deserves the awards more.

And, thank you Patricia for taking your precious time to watch 'She's my son' ... the credits certainly goes to the mother for her unconditional love for her son...

and R, thank you dear. We need to catch up again sometime ya, heard from Ly, that you are super busy now ... you keep shining there gal... love you.

hi crankster
Well certainly agree that Indra deserves to win. Being a good friend and knowing things that she'd gone thru..she is so smart,inteligent,kind,witty and funny.How can i not love this woman?

The AYA Dream Malaysia Awards is about our future and the people who are farsighted enough to invest in it. Started in year 2005, the Awards is in line with AYA’s objective of building tomorrow’s leaders today and to create a better and brighter future for Malaysia by inspiring, inciting and inculcating responsible attitudes and actions especially but no exclusively in the hearts and minds of our youths.

Pat, I definitely intend to rattle their cages for quite a bit longer. :)

Indra!!! It's you! :) How long did it take you to figure out it was me? I saw your sms last night and I could almost feel the incredulity through it! Keep up the good work - I always appreciate honest, unbiased reporting. I love you too.