They Are Munafik, Not Muslims

I saw this news yesterday. But even though I'm not even Hindu and carry no religious or emotional attachment to a cow, I was filled with rage.

So I decided not to blog, lest I said something I didn't really mean. Anger does that. I salute Naga, who has kept his cool without getting incited.

The mainstream media has kept mum on this issue, so I'm putting up this despicable picture on my blog because people need to know what this country has come to. 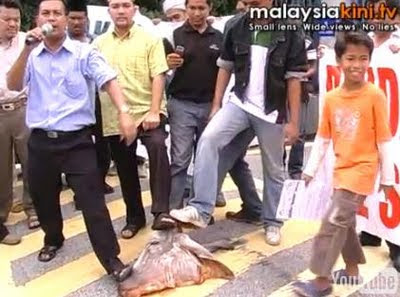 When I was a kid, I might have been gullible enough to draw across this image and think it represented all Muslims. I may have thought to myself, "Muslims are stupid, I want to migrate someplace else."

But you know what? I know heaps of Muslims. And they're a great bunch.

These ones who parade the dead cow's head and shout racial provocation? These fools are not Muslims, they are munafik - hypocrites! Listen to their words:

“I challenge YB Khalid, YB Rodziah and Xavier Jeyakumar to go on with the temple construction. I guarantee bloodshed and racial tension will happen if this goes on, and the state will be held responsible,” shouted Ibrahim Haji Sabri amid strong chants of “Allahu Akbar!”

This is gross injustice to the Hindus. The Hindus are perpetually marginalised. Because they are politically weak, they are largely ignored by Barisan Nasional.

Dozens of Hindu temples are demolished by state governments. Sometimes the idols are smashed and destroyed before worshippers can remove them. As Michael Backman once commented, it is an "action which is insensitive at best and a deliberate provocation at worst".

Occasionally, when the temples are actually relocated, there is vicious and intolerant protest against it. Is that fair??

The more I read about the injustices against Hindus, the more I understand why HINDRAF has such a following.

I was heartened today as I browsed some of the blogs. Most of the Muslims I know have condemned this act in the strongest words.

If you are Muslim and read this blog but never comment, please leave a message today.

Your Hindu brothers and sisters need to know that you will champion their cause simply because like you, they are Anak Bangsa Malaysia.

I'm not a Muslim and neither am I a Hindu but I think this has gone far enough. Something should be done be NOW before this country slides even further in the doldrums.

And you're right, these morons are not Muslim, in fact I don't even categorise them as humans!

It's called 'DNP' i.e. 'Did Not Permit' for police intervention.

This is, of course, different from 'DNHP' i.e. 'Did Not Have Permit' which is usually applicable for candle-light vigils only.

Then, there's the sanitised news from the MSM:

which should instead be re-titled "What cow-head demo?"

Indeed, munafiks are above the laws of this nation.

And thank you, NTR, for this year's Merdeka Day programme i.e. if you're not invited to Parliament on Monday, Merdeka didn't happen.

But we already know that, don't we.

I wonder if those munafik feel remorse, now that they realise their actions were downright foolish and unacceptable.

I've done pretty awkward things in my life. At the time of doing it, I felt great. But later when I realised the implications, I felt total regret.

I can only hope that they feel some semblance of shame.

Despite these things happening, there are people who still live in a cocoon, isolated from all that is going on.

thank the mighty GOD i'm NOT a
muslim !

do you notice that the majority of malay bloggers are silence(some are actually defending ) on this repulsive issue?and the best part is that,you have overseas bloggers who are quick to condemn the government/ngo of the country which they live in but oblivious to their own birth country disgusting behaviour....

And they demand respect when the they have no respect of others.Sorry mate! a spade is a spade ,it takes two to create equality and respect.

...after putting the bloooody cow-head there as 'offering' , they
say their prayers some more ....!!

Nick - you're probably right, they don't have an iota of shame, so they can't be humans.

Shar - yes, I can see how the absence of the 'H' (for have) makes all the difference and the opportunity for double standards.

Lita - they tried to backpedal and claim ignorance about the presence of the dead cow's head. But I can't quite detect any remorse so far. I'm not holding my breath either. That would be tantamount to UMNO apologising since we can guess who is behind all these shenanigans.

Anon @ 02:32 - you may have a point. The muslims are being insulted quite a bit these days - by others who call themselves muslims.

Anon @ 15:04 - maybe you're visiting the malay bloggers with low IQ. Every malay/muslim blogger I know has condemned this act in the strongest terms including my friend and commenter Shar above who is indeed malay and muslim.

Azly Rahman - Prophet Muhammad (PBUH) did not teach this!
MyAsylum - LRTQ2: Woe to the foolish aggressors
Haris Ibrahim - To my Hindu brothers and sisters, please forgive them.

Anon @ 16:46 - Ah yes, it appears that when they are about 50 in number and threaten violence and bloodshed, the police are unable to take action. Only those numbering about 10,000 and marching peacefully get tear-gassed and sprayed with water cannons.

Anon @ 16:49 - I think they presented the cow-head to the Hindus after saying their prayers. As Haris Ibrahim says, it nullifies any good arising from those prayers.

Anon @ 17:25 - Yes. Stupid parents are either extremists themselves or don't know what their kid is up to.

Why is that you're expecting Muslims to condemn this act? Why not Malaysians as whole?

The day we stop thinking in racial/religious divides will be the day the government stops using the same tactics against us.

Naga, I think all Malaysians have the equal right to condemn this cowardly and despicable act.

But at the back of our minds some of us do wonder if other Muslims secretly agree with what these buffoons have done.

I have satisfied myself that I have wonderful Muslim/Malay friends who do not echo the sentiments of these protestors. I am confident that my Chinese and Malay friends see me as a fellow Malaysian.

This rift of racial divide will take a long and slow process to heal.

Actually they are Muslims and they are dumbass ignorant.

this is by far the worst thing i have ever witness. the WORST!!!!!!!

i salute my hindu friends for not reacting to this.

zewt, u mean the semi-value !?