In November 2000, an up and coming American artiste called Shaggy, released a song that became a number one hit in both the US and the UK.

Since then, I have observed that "It Wasn't Me" has become the most popular refrain of politicians and other scoundrels worldwide upon being caught red-handed.

Our very own Tun Dr Mahathir is no stranger to this bizarre little attempt to extricate oneself from hot soup.

In a very amusing twist of events totally lacking in credibility, he claims that the massive crackdown on his political opponents was not his decision, but that of the police.

"Well, I would have handled it differently, except that the police wanted to do these things because they say it is necessary...

"I actually met all of the opposition members (beforehand) and assured them that they would not be arrested. And you know what the police did? They arrested them. My credibility is gone," he said.

"You must have been furious!" retorted Tom Plate, the interviewer and author of the book, 'Doctor M: Operation Malaysia - Conversations with Mahathir Mohamad'

"Yeah, but what can I do? You see, I have to accept that they are the people on the ground that makes a decision. I give general authority to them," continued Mahathir, who was known as a strongman who brook little dissent.

Some of you political stalwarts may have read an old publication by Ahmad Mokhtar Hj Mohamad called NEVER FORGET: The Mahathir Blunder. 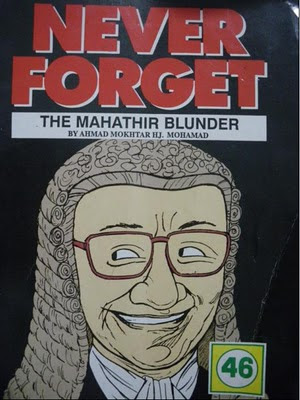 It summarizes almost every single scandal and scam that Mahathir has ever been involved in. Whenever he landed himself in trouble, Mahathir always looked for a distraction or directly removed the voice of dissent.

It was a steady and consistent pattern with which he fashioned himself. He has managed to repress our freedom of expression, freedom of speech, freedom of press and nearly everything else that would aid him in controlling the masses.

In the case of Ops Lalang, he desperately needed to buy himself time. There were heaps of problems:

a) The UEM scandal with which opposition leader Lim Kit Siang was hounding him.
b) Internal politics within UMNO - many did not agree with his unethical ways and opposed him. His win was very narrow. He proceeded to make UMNO illegal and then set up UMNO Baru.
c) Unemployment, recession and other socio-economic issues.

Bear in mind people, Ops Lalang wasn't the only measure he took. He also sacked judges who opposed him - even the Lord President Tun Salleh Abbas!

The Mahathir administration also amended the Constitution to redefine jurisdiction and powers of the Court and that of Legislators. He toyed about with the highest authority, our Federal Constitution!!!

Did he have the motive to deploy Ops Lalang? Hell yeah!

So I really don't give a hoot about his account of the events in 1987 - very little that comes out of his mouth is not a lie.

Haris Ibrahim appears befuddled as to why the former IGP corroborates his story - "why is Hanif jeopardising his own reputation for this past-the-shelf-life politician?"

The intricacies of I-scratch-my-back-you-scratch-mine don't overwhelmingly interest me, to be honest.

Perhaps Hanif Omar wanted a loaf of bread, and Mahathir Mohamad gave him one.

Or perhaps Hanif Omar took a loaf of bread when he thought no one was looking. Who knows.

It could even be admiration for the man.

If you ask me, the world has handed more accolades to Mahathir than he deserves - numerous books written about him by Tom Plate, Barry Wain etc.

And you have to admire his ability to raise a ruckus even after "retiring". Nothing about this man is graceful.

Whatever it is, I am confident that it was he who ordered Ops Lalang. You are free to think what you like.
By Crankster at 21:15

Hahahahahaha! I call it "Tai Chi". It happens in every institution and company.

Your knowledge or recollection of all that has happened is very, very impressive.

It's good that you're laying out all for others to see, lest people forget the past and are doomed to repeat their mistakes again.

Then who signed the detention orders including those suspending the Star and putting away Karpal and LKS for two years, while all the (for window dressing) UMNO guys were relased within a month? Hanif? My ass!

dpp
we are all of 1 race, the Human Race

Joshua Lopez - Yes, you're right. But for a PM to tai chi something of this magnitude goes to show the depth of the rot.

DPP - He actually thinks the public are so stupid to fall for that kind of crap. I wish he would at least try to maintain an ounce of dignity - but my wishes are in vain!

and now he says it was more than 20years ago since 'Ops Lalang' that he can't remember which opposition leader met him at the closed door meeting!

For God's Sake! This Doctor is far from senile! He has better health than most youngsters!