It was a friend living abroad who first alerted me to this fiasco via email. So much for me slinking into the office and thinking it was going to be an uneventful Monday.

Oh no, a scandalous video had to show up.

The said fiasco was unveiled to the mainstream media with much pomp and ceremony - complete with confiscation of cameras and all recording devices outside the room, and journalists made to dress in robes before being allowed in to view the footage.

They had Sodomy I. Then came Sodomy II. But they cannot help but continue to flog a dead horse, in the hopes that it might suddenly get up and start galloping. 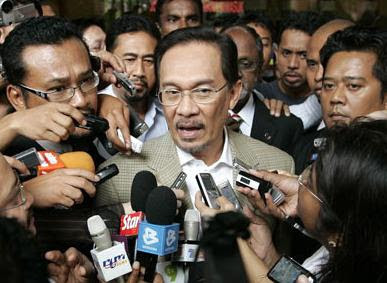 Hence, some BN-inspired twit had the lack of creativity to come up with a musical of Anwar Ibrahim doing the horizontal lambada with some East Asian woman (but of course), purported to be a pr0stitute.

"Anwar is not a pious person with high moral value and integrity as portrayed, and therefore he is not fit to be a leader," they said in the statement signed only "The Insider".

Okay, it wasn't a musical, but if they were going to subject us to this same old crap, they could have at least put in some effort.

Anwar, of course denies it. He needn't have bothered - no one worth their salt would actually believe that he was the star of this CCTV invasion of privacy.

Not even his detractors, of whom I am one.

In fact, I am almost inclined to believe it was a plan hatched up by Anwar Ibrahim himself to boost his flagging popularity.

Nothing brings support as much as sympathy for a man much wronged.
By Crankster at 22:42

Stupid Donkey was just too reckless eventho knowing pretty well that many want to bring him down! "The Difference Between Stupidity & Brilliance is, Stupidity has no limits!"-Albert E.

if it were a setup they let idiots run the show - all the nut has for evidence is grainy cctv images and a watch most malaysians wear. If it were me i'd have used condoms, tissues with DNA, or even the china doll all pregnant and stuff...!! Sheesh is this all they can come up with?

My view is that they forgot to consult the professionals (i.e. APCO) first and released the product too hastily. To try to influence the Sarawak state election.

Bad mistake ...... how to deal with the ensuing customer derision?

It's Thamby's Work lah! The same Thamby that had a scandal with a school girl and was then forced to leave politics and all positions!

Glad I'm not a politician, that's all I can say. With such low-lifers infesting the top echelons of Umno & following political rivals around with hidden cameras, my exploits could fill an entire webstreaming website :-D

Joshua Lopez - if Anwar Ibrahim did indeed screw a chicken and a cow at the same time, and get caught on tape doing so, I don't think the rest of the nation would believe it, given the amount of baseless and ludicrous sexual allegations against him. And yes, I remember that Thamby!

Phua Kai Lit - Absolutely! I'm sure APCO is currently wringing their hands and cursing themselves for taking on a loose cannon customer that cannot exude good PR to save its soul!

Crankster, the video this time seems to be real and Umi Hafilda claims that she has 18 videos of Anwar banging male and female chickens!

You see, this man obviously had enemies while he was DPM, he stepped on many and now it's pay back time and for them to take such revenge on such a man (knowing that the public look up at him as a Saint), i'm sure they have the right man on the recordings!

He may have had a stomach before and now he has loss some weight.

For Example, Dato'Lingam had a beard in the recordings and now doesn't have a beard and has put on significant amount of weight.

Maybe it's him, since he was quoted as saying, "It is revenge".

But not everyone would have access to that video to judge for themselves. Whatever the govt says is totally ignored by the citizens.

It is futile - after 2 charges of sodomy.

So as of today, we know that it's definately Anwar! The pictures taken from his sex video have made headlines in all malay newspapers today & His video has been out in youtube last night. It's Him Alright & it's very clear.