Lynas - Go Back To Australia!!!

I have, in the past, stated that I am a firm believer of progress and development.

But a rare earth refinery plant is not my idea of progress. Not in a small town like Kuantan, in a small country like Malaysia. There are too many risks involved and not worth the perks.

Lynas is an Australian company based in Sydney. Most of the material comes from Mount Weld in Western Australia, the richest known deposit of Rare Earths in the world.

So why are they refining it in Malaysia, across the sea - far, far away? Why don't they just refine it in Australia?

Ladies and gentlemen, I present to you: AUSTRALIA 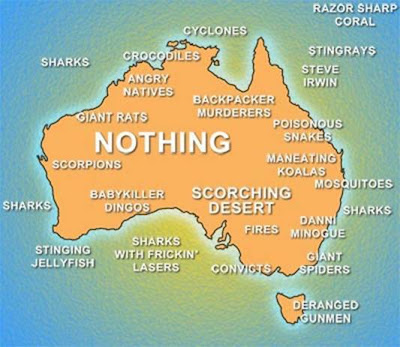 Enclosed by giant rats, babykiller dingos, scorpions, and scorching desert is a whole lot of ... nothing.

That, in my opinion, is a fine place to build a refinery.

Sure, it will be grossly inconvenient to have to transport up the raw materials there, to convince people to go and work there, and to build the facilities to support the operations.

But at least any waste disposal in the middle of nowhere, in my opinion, would not be harmful to the people, not in the same magnitude that unmanaged waste would be in Kuantan.

You see, it is prestty clear to me, that at the end of the day, it is not about human safety. It is about profits. It costs far more to pay Australian labour than cheap Malaysian labour.

It would be more costly to transport materials into the middle of nowhere and build those facilities - even if it is safer for human beings.

If you ask me, I don't think the Australians would put up with those sort of risks. They are much firmer with their government than we are with ours. We have given our government too much leeway.

People, we need to protest this as strongly as we can. Lynas must never go into operations in Malaysia.

RELATED: Special Delivery
By Crankster at 20:00

You're right mate. Too much at risk. Double standards. But it takes two to clap. Lynas' smart. Too smart. Malaysia? Malaysians? Instead of putting DSAI into Putrajaya, they want to put him into jail! You make your bed, you sleep in it :(

Well Said Crankshaft! So Well Said. Now why is this Aussie bringing in DSAI into this topic? He is far from an angel and i still clearly remember how fanatical and Anti Christian he was as DPM. He even had an issue with Church Bells.

Got thrown into jail and perhaps learnt how his very own system of fanatical governance threw him out of power and into jail.

Observer from QLD - I'm not a huge fan of Anwar Ibrahim, to be honest, but I think the whole trial is a sick joke.

Joshua Lopez - I'm still skeptical of him. But we need to get BN trashed ASAP. They are a hazard to health.

I think there are a few things missing off that map. ;)