Rosmah Inserts Her Foot Into Mouth

The US 24.8 million diamond was actually bought from savings since she was a teenager... 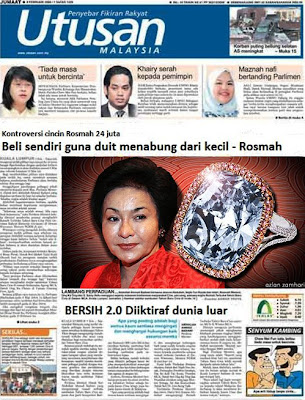 According to the Utusan Malaysia article, Rosmah Mansor, wife of PM Najib Razak, is quoted as saying that – yes, she bought this 30-carat diamond from Jacobs & Co. Fine Jewellers New York for US$24,458,400 – and that the money came from her savings since she was a teenager!

I have no idea whether the above quote is correctly attributed to her, but since her picture and the actual diamond bought also appeared in this same Utusan Malaysia article, and, so far, she has not denied it, we have to assume that this assertion did come from her mouth.

Unless Utusan Malaysia and its UMNO cohorts are the dumbest illiterates and can't-count-at-all morons, or they think all citizens of this 1Mar-rae-sia country should qualify for these "titles" I am flabbergasted as to the extent of their naivety and their nonchalant acceptance of this status quo!

3. She received the "Honorary Doctorate of Innovation in Human Capacity Development" from the Limkokwing University of Creative Technology on 22 March 2011.

4. She married Najib in 1987 and they have 2 kids – Nooryana Najwa Najib and Norashsham Razak Najib. This is Rosmah's second marriage, as she was previously married to Farid Ismeth Emir, a former TV presenter, and current job appears to be a GM of a trading company. She also had 2 kids with Farid. It is also Najib's second marriage – he first married Tengku Puteri Zainah Tengku Eskandar ("Ku Yie") in 1978, and she bore him 3 kids. He divorced Ku Yie in 1987 to marry Rosmah.

5. According to her official website http://www.pmo.gov.my /datin rosmah, she then worked in Agriculture Bank Malaysia until 1983, and as Business Development Manager at Island and Peninsular Berhad, where she worked until 1987.

7. She now tells us, as stated, that this US$24.5 million bauble was bought from her "savings" since her teenage days!

Wow, even better than Bill Gates or Warren Buffet who both had to work their butts out to get to where they are today!

8. She worked only 9 years from 1978 to 1987 in low to mid-level Managerial positions – the usual starting positions for most new University graduates – and basic pay-wise, would be around RM2,000 per month in 1978 to RM4,500 per month in 1987 – maybe, if you consume just nasi lemak and teh tarik every day, you will be able to save some money from these salaries! But RM74.5 million? Dream on!

She would be world famous if she wrote her thesis on how she did it – My Way!
By Crankster at 00:14

Go to Rocky's Bru and read his post at http://www.rockybru.com.my/2011/07/jacobs-not-rosmahs-diamond-ring.html which says the Utusan's banner and statement about "paying from savings" was faked by an unidentified blogger.

As for Ka' Grossemah, in her press conference yesterday, she did not deny she bought the ring, but instead said she would not answer bloggers' speculation.

What should the M'sian public make of it? You got me there though you can check out my response at http://donplaypuks.blogspot.com/2011/07/diamonds-are-forever-but-lifes-not.html

dpp
we are all of 1 Race, the Human Race