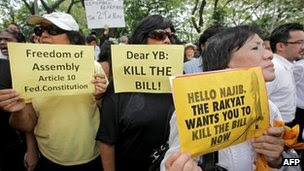 The Malaysian parliament has passed a ban on street protests, despite a rally against the bill by crowds of lawyers.

But critics say it replaces a rule requiring a police permit for a demonstration with one that bans street protests.

Some 500 lawyers marched in the capital ahead of the vote.

Read the whole thing HERE.
By Crankster at 07:06