Shame On You, Britain! 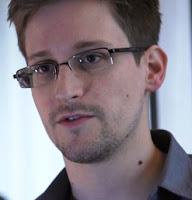 First things first: if you believe in personal privacy and don't think that any government should be allowed to go about reading and recording our emails, Skype messages, Facebook posts and phone calls, sign this petition that would call upon Barack Obama to ensure that whistleblower Edward Snowden is treated fairly, humanely and given due process.

If you have been too busy to keep up with the news (or have taken up dwelling under a rock), the gist of it is that Snowden was a CIA programmer who was working on a project called PRISM that involved shamelessly unforgivable and unscrupulous spying on ordinary citizens.

His conscience presumably got the better of him and he spilled the beans to the Washington Post (which I once respected but now regard as a tool of those more equal than others) and the Guardian (a notably left-wing newspaper that can be a bit bunny-hugging at times but usually has its head screwed on).

Since then, the Americans have been trying to get their hands on him with a vengeance. But apparently, the ire is not limited to them Yanks. Guess what the Brits are up to:

The request came following reports that the UK had issued an alert to airlines around the world urging them not to allow the former CIA employee to board flights to Britain.

Britain's Home Office told carriers to deny Snowden passage on UK-bound flights because "the individual is highly likely to be refused entry to the UK", the Associated Press reported.

The news agency said it had seen a photograph of an "alert" with a Home Office letterhead taken Friday at a Thai airport issuing the directive.

It added that a British diplomat had confirmed the document was genuine.

A Malaysia Airlines spokeswoman in Kuala Lumpur told AFP Friday the carrier had received a notice asking it not to allow Snowden to board flights to the UK.

"We have received a notice and we have issued it internally systemwide," she said in a text message.

The notice was marked as a "message from UK border", said the spokeswoman.

"Apparently the notice came from UK Border. So don't allow him on flights to UK," she added.

On the subject of PRISM, Foreign Secretary William Hague has denied that Britain has done anything wrong but GCHQ's statement doesn't issue a denial of the allegations made by Snowden of complicity with the Americans.

To begin with, Edward Snowden is not stupid. There is no way he is going to waltz into Britain, the country he is equally implicating. So why issue formal restrictions?

Further to that, it is disturbing that Britain is acting as a running dog to the US government. This sort of fawning is expected of third world nations. This display of authoritarianism is more akin to China than any nation that professes to uphold human rights and democracy.

However, all is not lost; a British former solicitor with extensive data protection knowledge has this to say:

Data protection in the USA is often thought to provide too low a level of privacy protection for Uncle Sam's citizens, seen from a British perspective.

That the UK government doesn't appear to be supporting Edward Snowden's stance is accordingly disappointing.

Given that there is often data-sharing between US and UK security services, it can be thought highly likely that the UK will have benefitted from PRISM programme disclosures.

The whole issue requires detailed and thorough investigation to ensure that online privacy rights have not been breached and it is understood that the Information Commissioner is quite properly calling for such an investigation so as to ensure that the UK government holds to its obligations under binding international treaties.

It remains to be seen whether the UK government will indeed hold up its end of the bargain or whether it will too easily bow to US demands; tension is thought likely to arise behind close doors.

Perhaps the rest of the world ought to tell these two countries exactly what it thinks of them.
By Crankster at 05:30