Why On Earth Would We Need The "Warisan Merdeka"??!

The Petronas Twin Towers were touted as providing more office space. Today, many of the suites are empty and not utilised.

So why would we need even more office space in the form of a 118 storey tower called, "Warisan Merdeka"? To begin with, most people don't even want it. 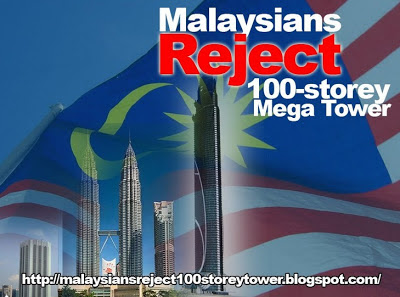 Two Malaysian landmarks, the Merdeka Stadium and Stadium Negara, will be eclipsed by a 118-storey tower that will affect the landscape and lives, a group of activists and politicians said in Kuala Lumpur today.

The RM5 billion project by Permodalan Nasional Bhd (PNB), which will include other buildings, is to be developed on a piece of land that was gazetted as a People’s Reserved Land. It has angered people, and not only because Kuala Lumpur City Council (DBKL) gave landowners 200 metres from the site 14 days to voice their complaints.

“We’re disappointed that the project was planned without the consultation of the people,” said Chua Tian Chang, the MP of the Batu constituency who is better known as Tian Chua.

The development known as Warisan Merdeka is right beside Stadium Negara and Stadium Merdeka, the latter an iconic landmark where Malaysia’s independence ceremony was held on August 31, 1957.

“We don’t see how a 118-storey tower adds any architectural value to the landscape of Kuala Lumpur,” said Chua.

What kind of name is "Warisan Merdeka" anyway? In what way would a 118 storey building reflect the heritage of our independence as is what the name suggests?

The problem with these stupid, corrupt politicians is that the smell of money is so strong up their nostrils that they can't hear themselves think for the pounding of their avaricious hearts.

Because if they could, they would realise how stupid it sounds and appears.
By Crankster at 22:30