It happened a long time ago, when Britain was struggling to maintain its dominance in the world.

There was a major war going on. The British wanted to maintain its hold on all its colonies, but in Malaya, the Communist insurgency was proving to be quite a challenge.

Britain eventually lost its power and status, but its sins have come back to haunt it. 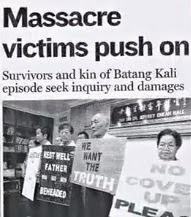 It was a time when some lives were more important than others.

It was a time when some lives didn't matter at all.

The people of Batang Kali suffered because of this mentality.

A 14-man Scots Guards patrol was tasked with interrogating the villagers about communist guerrillas operating locally.

Given that no answers were forthcoming, it is very likely that said villagers had no information and probably were not cooperating with and/or helping the communists.

Yet 24 civilians were killed in cold blood.

The British, in the past, turned a blind eye to it, never properly having investigated the incident - for political reasons.

But this time, the Supreme Court is going to hear the case and have the witnesses tell their side of the story.

It's about time. It really is.

Related:
The Independent - Batang Kali killings: Britain in the dock over 1948 massacre in Malaysia
The Guardian - Malaya inquiry to hear from survivors of Batang Kali shootings by British troops
By Crankster at 11:45