I have read some of Shaun Tan's previous jottings on LoyarBurok.

Some of them made me roll my eyes before swiftly moving on.

I suspect he is a young man with ideals about how things should be, and it appears that he takes a lot of his cues from Western nations. I am not going to criticise him for that - as I myself used to be exactly as I describe him to be (and they say people in glasshouses shouldn't throw stones).

But in a move that probably would surprise the people who know me best, I am going to say that this time, he does make some good points.

Referring to the scandals that have plagued Malaysia, and the liberal Malaysian's response to it, he says:

The most tangible response is Bersih 4.0, a rally planned for the end of the month. Although it aims to gather hundreds of thousands of Malaysians together to protest in three of the country’s cities, its organizers intend to disperse it after two days, even if its demands for Najib to step down and for the implementation of institutional safeguards against corruption are ignored, which they probably will be. It is not expected to change anything.

Though suggestions have been made to expand the two-day rally into a mass civil disobedience movement – one that provokes confrontation with the authorities and occupies key areas in the major cities until its demands are met (probably the only strategy under the circumstances with a chance of success) – Bersih’s organizers seem to have rejected them, asserting instead that the purpose of the rally is to “send the government a message.” That the ruling party has ignored the message of previous Bersih rallies with impunity has not prompted a strategy rethink.

I can see where Shaun is coming from.

We are talking about scandals, that in many other countries (and not necessarily just developed ones), could have heads rolling. The French, I believe, sent dear ole Louis and his missus, Marie Antoinette, to the guillotine for carelessness of that very magnitude.

As Shaun has articulated:

Over the 1Malaysia Development Berhad (1MDB – a state investment fund) corruption scandal alone, for example, Prime Minister Najib Razak has sacked the attorney general who was meant to be investigating him, had the offices of the Malaysian Anti-Corruption Commission raided to hide evidence of his crimes, suspended The Edge (a local paper) and blocked The Sarawak Report (a whistleblowing website) for reporting on it, and claimed that the $700 million transferred to his personal bank account was a donation. How, many ask, could someone who has so blatantly betrayed the public’s trust remain in power?

How indeed, does he have the gumption to remain as PM?

Now I am not suggesting that we emulate the French. It is not remotely in our culture to be as confrontational or as aggressive as the Europeans (or Americans, for that matter) are. We have been tear-gassed, but we barely retaliate by at best, returning a tear-gas cannister at the FRU. Often, we just grin and bear it (for lack of a better description). 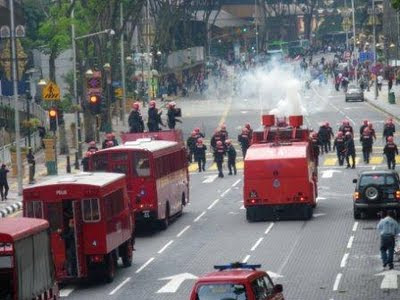 To begin with, only today, I read someone on my Facebook feed stating that the organisers of Bersih 4 restrict their rally to a stadium - behind closed doors - to avoid inconveniencing the public and avoid skirmishes with the government and their band of entitled running dogs, aka the police. 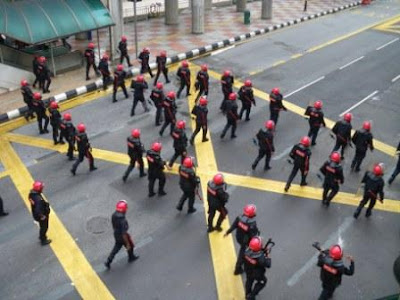 It reminds me why I left Malaysia. I can't decide if it's apathy or well-meant concern for the well-being of fellow Malaysians. 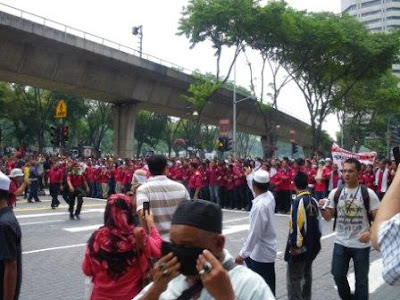 But that sort of attitude is what empowers criminals to remain in power despite the evidence of their wrongdoings.

I support Bersih 4, because it is part of the process that helps us to decide what further we must do, but we also need to discover better ways of dealing with the corruption and misbehaviour of the people who hold the power.
By Crankster at 03:26