No, Not Acting Out Of Envy 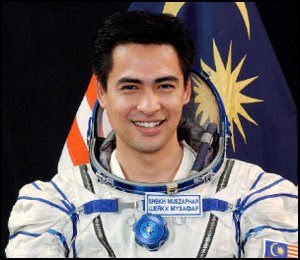 I have logical myopia.

But only logical myopia, mind you. I can still see other objects clearly and this boy has the most dazzling smile I've seen in a long time. Damn!!

It appears that most Malaysians are divided in their opinion over this space programme.

Certain parties are delighted over the choice of candidate, in particular, X-Eyed Jules, who believes that his aesthetic qualities especially, should be milked.

Unfortunately because he is so good-looking some jealous souls have been cruel enough to spread rumours that the good doctor bats for the other side (I heard this from a 10 year old boy, believe it or not)..

..Imagine if a foreign female has never met a Malaysian male before (and doesn't know any 10-year old Malaysians) and she sees DSM’s mug on the NASA website. Wouldn’t that provide a wonderful first impression?..

.. I could already see the Tourism Minister planning a campaign to woo shallow female tourists to Malaysia on the back of DSM’s fame.

Then again, X-Eyed Jules cannot be accused of being myopic; he is already cross-eyed anyway. :)

Then there are those die-hard fans of the space programme who accuse their opponents of "acting out of pure envy".

If I was consumed with pure envy, I would say pretty boy is gay. But I don't think he is, and wouldn't care if he was (I don't stand a chance anyway!).

But again, I'm still more concerned with the purpose and outcome of this whole programme which is costing us a bomb.

I do wonder. Are we really expected to be proud of our "astronauts" when they have not done anything exceptionally spectacular beyond donning a space-suit? Malaysia Boleh? Boleh apa? Pakai baju?

A Voice says, "This is our first trip up and its not our space craft. Before we run, shouldn't we learn to walk."

This is not learning to walk, much less run. This is being carried, which serves no purpose whatsoever.

Let's look at the definition of ASTRONAUT:

An astronaut or cosmonaut (Russian) is a person trained by a human spaceflight program to command, pilot, or serve as a crew member of a spacecraft.

Until 2003, astronauts were sponsored and trained exclusively by governments, either by the military, or by civilian space agencies. However, with the first sub-orbital flight of the privately-funded SpaceShipOne in 2004, a new category of astronaut was created: the commercial astronaut. With the rise of space tourism, NASA and the Russian Federal Space Agency agreed to use the term "spaceflight participant" to distinguish those space travelers from astronauts on missions coordinated by those two agencies.

Pass a strict physical examination, and have a distant visual acuity no greater than 20/50 uncorrected, correctable to 20/20. Blood pressure, while sitting, must be no greater than 140 over 90.

Commander and Pilot
Bachelor's degree in engineering, biological science, physical science or mathematics is required, and a graduate degree is desired, although not essential.
At least l,000 hours flying time in jet aircraft, and experience as a test pilot is desirable.
Height must be 64 inches (5.33 ft) to 76 inches (6.33 ft).

Now engineers are highly boring individuals. No one really makes movies or dramas about us. The only field we seem to excel in is in aerospace, and even that is a highly competitive field.

Trust me, I know. At the risk of exposing my identity and/or blogging about work, I have a degree in Aerospace Engineering, majoring in Aeronautics and minoring in Astronautics.

And even I have no business being up in space. I'm just not qualified. Period.

Assuming I was born in the USA and had a fighting chance, I only have a bachelor's degree and no experience in the armed forces, which seems to be an unspoken requirement.

Nowak received her commission from the U.S. Navy in 1985 and became a naval flight officer in 1987. After her postgraduate studies Nowak entered Aerospace Engineering Duty and the U.S. Naval Test Pilot School. She has logged over 1,500 hours of flight in over 30 different aircraft during her career in the Navy, and has obtained the rank of captain.

Now that's an astronaut - cuckoo or not. How does our jaguh kampung compare?

Yup! i remember the female astronaut. Couldn't believe my brains -- someone that smart doing something that (you could say) should have stayed in a blockbuster movie!

What a shame! Brains wasted!

"..Imagine if a foreign female has never met a Malaysian male before.."

Ok here's a simple two pronged plan. Let's focus on what the guy does best. Modelling. Just give em the god damned SPACESUIT for heaven's sake and let him strut his modelling stuff on that, period. Guy's a model for heaven's sake, why would he need a Soyuz. Hence save the millions in taxpayer's money. Wolla!

Thanks for your comment on our site. And yes, we thoroughly agree. Malaysians are divided on this issue.

Will we really be learning something useful from this endeavour? Or, more importantly, will we contribute in some useful way to the mission (apart from money).

Thanks for the compliment! I went through your site and realised we come from the same alma mater. I graduated the year you entered. And cotton-floss brains indeed! You're pretty intelligent yourself! :)

As for Lisa Nowak, I'm sometimes too hard on her, but I think I can understand the pressure she must have been undergoing when she pulled that whack stunt!

Kå£îMåñ†Rå, you would probably like to take it up with good ole X-Eyed Jules on his site.

Only problem I see with the damned spacesuit is that when worn fully, it covers that pretty face.

We need more publicity shots before he goes off into space.

I know that a lot of other things could be done with the RM30million. (Actually, the figure varies, some say it's higher).

But at the risk of sounding like a selfish @$$hole, at the end of the day, we will always have the poor, our roads will always need maintenance, we will always pay toll, our public transportation will never be enough etc.

IF, this space programme was going to benefit us in some way (however small), I'd be all for it even if we could make better use of the money.

But I HONESTLY cannot see ANY purpose in this entire programme, apart from tourism.

oH yeah c shaft i sidestepped to his b log 1st time i was here the other day aye. Boy i sure cant leave this subject just yet haha. He can always justhold the helmet c shaft afterall he dont need to be anywhere near space haha.. But ur so into his face still aye haha :oP

Maybe a differing perspective might be a healthy riposte? First off, no matter how he got there, who paid what etc, we should give credit where credit is due. He came out tops from a programme that had 11000++ participants. He went through physical tests, mental tests etc and I believe, earned his right to be lead astronaut. Sure, he has good looks, but surely, are we so jaded as to think that the only consideration in choosing him? Remember also that he was with the russians for 11 months, pariticipating in the same program that their cosmonauts go through, and this should not be taken lightly. As proffessionals, the Americans nor the Russians would want an imp to go to the ISS just so because the risk of an incompetent person doing damage to the ISS is too great.

As for a military backgrond, sure, that was the tradition started by the americans and the russians during the start of the space race. Most astronauts come from a test pilot background, because they are percieved to have the competency, and the attitude to handle spaceflight. Fair enough, but many many other astronauts since then do not possess miliatry backgrounds. Same goes for the Masters degree, in fact, the first crop of astronauts considered had no bachelors degree whatsoever, only experience out on the flightline testing planes. A college degree only became a requirement when Eisenhower stepped in. Besides, our good doctor is not exactly an imp either. You have a degree in engineering... he went to medical school, ask any prospective mother in law, both qualifications are just dandy!

Frankly speaking, this first trip to space may not mean much scientifically, but it can be said that Shepard did not do much either when he first went up many many years ago. Some pointed out and quite rightly so, that this is an exercise notable more for its symbolism than science. True, but hasn't the journey into space all these many years been not just about science, but also about inspiring others to go beyond their borders, beyond their limitations, to go farther? Sure, we did not build the rocket that went up to the ISS, and as far as I can see, the extent of rocket science here in Malaysia generally is putting the odd "Moontraveller" into a bottle before lighting her up during Raya. If the good doctor manages to inspire the young ones to strive harder, to work better, to lose the shackles that besets the current generation, is this not worthed it?

You know, as I write this in California, the news here have been harping repeatedly about our good Doctor. NBC commented how our initial selection program is very similar to the Mercury space program.... and all of the coverage has been nothing but complimentary. To a Malaysian living and working in Cali, and for a Muslim, to see on the news here in the US, that there is a Malaysian muslim going to space, and who hopes to show muslims around the world, and his own countrymen, to better oneselves so as to accomplish the impossible, is pretty good TV.

Yeah Kå£îMåñ†Rå. It must be a sin to let a cute boy go unnoticed. :p

I concur with your opinion that he was chosen rightfully among Malaysians - for a space tourist role, NOT astronaut. His good looks would not have been the ONLY criterion, but it certainly helped. It is, after all, all about image.

However, bear in mind even the first space tourist, Dennis Tito, has a BSc in Astronautics and Aeronautics from NYU and a MSc in Engineering Science from Rensselaer Polytechnic Institute.

I think in a roundabout way, you agree with me that there is nothing scientific about this entire programme - it has everything to do with symbolism. And I'm not going to argue with that.

If people are convinced that 6 months of training qualifies one to be an 'astronaut', so be it. I'm glad I'm not as stupid as them, but I'd hate for such stupid people to get inspired and start taking up aerospace as a profession unless they plan to go get lost in space and never come back.

I'm glad the American news has nothing but good to say about our space programme. It'll probably be the only positive note I'll ever come across. You do recall the overwhelming welcome and publicity that another space tourist Anousheh Ansari received?