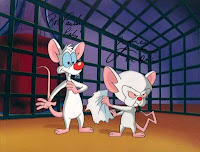 Pinky and the Brain (or lack thereof) strike again.

This time, it's Kickdefella who has been nabbed. I presume it is over the issue of flying the flag upside down. I would really love to hear what Brain (or lack thereof) has to say this time.

This country has turned into a circus.

As usual, I am unable to see any connection to how an upside down flag constitutes sedition, which is what Kickdefella has been charged with.

Bear in mind, Khir Toyo and Ahmad Ismail who invoked the wrath of Malaysians nationwide by racial and religious accusations still roam free.

It is possible that UMNO has been strategising. But evidently devoid of brain cells (due to lack of usage) the only political action they could cough up, was to switch portfolios.

The Defence Ministry has now come under Abdullah's jurisdiction and Finance Ministry under Najib. It is evident that Abdullah has both the police and military under his purview.

Very, very dangerous. Perhaps Pinky is not as stupid as he looks.

I suspect the final option will be put into play. Emergency Rule.

One suspects that only under steady state does Newton's third law hold. But these are strange times and we have reached supersaturation. An action will cause an even greater reaction.

Emergency rule will cause us to immediately lose complete credibility as a tranquil island in an ocean of stormy waters. People have already gotten used to what happens every now and then in Thailand and Indonesia. But not this country. So if it happens for the first time in a long while, the shock will be sharp but it won't be therapeutic. The Index may even drop below 500. We only need to recall how it was at 200 to tremble at this potential earthquake. In other words, national wealth will be devastated, personal wealth shaved by the multiplier effects from loss of investor and economic confidence and then currency and interest rate fluctuations, capital flight and so on. If all this takes place while oil price drops further, govt revenues will shrink more and its deficit magnified in effect across the whole nation.

But it's more than just economics. One must remember what happened when the pharaoh left. There was so much release of pressure people just voted for mr nice guy by the sort of sheer momentum that would have made Sir Isaac green with envy. If this mr nice guy now does this mugabian fist thing, there may be need for a Newton's 4th Law just to try and explain what will happen by reaction immediately after he vacates his post. The same cause-and-effect as for GE11 that went into reverse gear in GE12 will create the biggest tidal-wave for GE13. 2010 t0 2012 is not a long time. By the same token 2010 from 2008 is equally short.

He better go back to his drawing board again. He should try one of those newfangled simulation software for a change.

is walla a lulu?

BTW, so much spin too giddy to comment on ..this:

They said it was a positive development which could strengthen the country's position on both fronts.

MIC President Datuk Seri S. Samy Vellu said Najib's appointment was appropriate as he had the caliber to head the ministry.

Samy Vellu said he was confident that all projects earmarked for implementation under the Ninth Malaysia Plan (9MP) would be completed on time under Najib's leadership of the Finance Ministry.

"I praise Abdullah for appointing Najib as the Finance Minister and for taking over the defence portfolio.

"As a Defence Minister, I'm confident that he (Abdullah) will be able to ensure the country's peace and security will continue to be safeguarded," he said when contacted.

Abdullah and Najib today swapped portfolio as part of the leadership transition plan slotted to take place in June 2010.

Works Minister Datuk Mohd Zin Mohamed said Najib appointment into the portfolio would give him hands-on experience in managing the country's economy.

"I sincerely believe he have all the experience and strength to tackle whatever the economic challenges facing the country," he said.

"He must have seen this as the most suitable decision for the country at the moment," she said.

In PUTRAJAYA, Foreign Minister Datuk Seri Dr Rais Yatim said the portfolio swap should not be seen as having a personal agenda.

"Najib is not only educated in the field of economy, he has also been contributing to the success of the country's various financial policies and programmes," he said.

In KOTA BAHARU, MCA Youth chief Datuk Liow Tiong Lai said Najib should be able to attract more investors into Malaysia based on his wide experience at the international level.

"We are confident that Datuk Seri Najib will be able to discharge his duties effectively apart from making sure the leadership transition plan would go on smoothly," he said.

"By switching portfolio, the prime minister is allowing Najib to go straight into the deep end, so to speak, which is to oversee finance," he said.

Asked about claims that Abdullah was fortifying himself by having the military under his charge, Shahrir said the opposition would always find ways to make all sorts of claims.

Melaka Chief Minister and Umno vice-president Datuk Seri Mohd Ali Rustam described the switch in the portfolio as a good move to smoothen the transfer of power in 2010.

"The finance portfolio, traditionally, is held by the prime minister," he said.

Meanwhile PPP Youth Chief Senator T. Murugiah, who is Deputy Minister in the Prime Minister's Department, said the move was necessary taking into consideration the power transition plan between Abdullah and Najib in 2010.

"May be Abdullah wants Najib to learn more about financial matters so that it will be easier for him when he takes over as prime minister in 2010," he said.

well well watson, the dots do connect the line .

i love you, no shit sherlock.

i love you too, more than ever thee will know/

btw, the cat called Diamond overturned the candle which burned the paper which contained the 4th law: