Clear And Present Danger In Malaysia

That title - 'Clear And Present Danger' - caught my attention in Malaysiakini. I had instant thoughts of Jack Ryan, the Intelligence officer every country wants to have.

For those of you who read Tom Clancy, you'd probably know it was from a title of one of his books. Others may remember it being a movie based on that book.

But did you know that it was first used by Justice Oliver Wendell Holmes, Jr in his opinion regarding the freedom of speech? He says:

The question in every case is whether the words used are used in such circumstances and are of such a nature as to create a clear and present danger that they will bring about the substantive evils that the United States Congress has a right to prevent. It is a question of proximity and degree.

It was then that I understood how apt the title in Malaysiakini was: Ibrahim Ali a clear and present danger

That being said, I do not advocate the ISA against Ibrahim Ali. It is a draconian law and should be replaced with other laws that demonstrate human rights even when the perpetrator is not deserving of those rights.

Besides, it's not just Ibrahim Ali who is a clear and present danger. He may be the noisiest of the attention-seekers, but he's not necessarily the most dangerous. 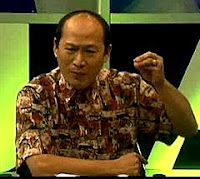 We have overlooked a huge blimp on the face of humanity. His name is Ridhuan Tee.

His blog is still spewing bile - in what seems to be a logical and reasonable manner.

This man is seditious in every sense of the word.

While most people can agree that this Utusan Malaysia fiasco is a major boo-boo by UMNO, Ridhuan Tee attempts the impossible - to defend the spin-bloggers and even Utusan. Some excerpts:

Based on my experience of the Christian religion [Ridhuan Tee claims to have been Christian once] and tales from some church-going Christian friends, the newspaper report last Saturday about the movement to Christianize [the country] was not surprising.

It cannot be denied that there are ambitions in that direction, although perhaps not as extreme as reported or described. However, to completely deny that the movement does not exist is unfair to Utusan. Utusan seems to be alone. Its friends have become opponents.

The Christian movement in Malaysia through the ultra kiasu [he is referring to the Chinese here] and several other political parties has long existed. The chief ultra kiasu in Selangor is the main planner.

Yet we keep giving them the benefit of the doubt [see how he implies that the Muslim Malays are a tolerant lot being taken for granted?]. Every Sunday, the Selangor ultra kiasu bulletin is provided and distributed free at the church. The goal is to maintain power.

I feel increasingly sick at heart when I heard a Christian senior minister going as far as to say, "What is wrong with a Christian becoming the Prime Minister?" It is not wrong because the constitution does not specify religion of the person who can become Prime Minister. The issue is that those who understand the history and politics of Malaysia would be most hesitant to seize the position of Muslims (Malays). In this case, we want a leader who has integrity and is respected. [he is implying that only a Muslim Malay could do the job].

It is the duty of Christians to spread their religion across the world, as enshrined in their holy book. As is our responsibility towards Islam. The special circumstance in our country, is that Islam is protected from propaganda of other elements.

They want to make Southeast Asia a Christian hub after their success in Indonesia. Their next target is Malaysia, after success in Singapore. Among the target areas are Mentakab, Kuantan, Perak, and so forth. Don't bother mentioning the states which are ruled by the ultra kiasu. That is their paradise. Many of their representatives [Pakatan?] are strong Christians [ah, so it's political after all - he's saying vote for UMNO, not Pakatan].

Construction of houses of worship should have a formula [he means a restricted 'ratio'], rather than allowing anyone with a lot of money to build anywhere he likes. Based on that formula, one day Malaysia would be filled with churches and temples, due to their tremendous ability compared to Muslims, because they have an international network [this is fear-mongering, claiming that Christians will take over the nation].

I still remember how two years ago, an al-Islam magazine reporter in July 2009 was arrested for going undercover in the church [arrested? no such thing!]. There was a national outcry, and the management of the magazine al-Islam was severely criticised. There was no one who defended the magazine and journalists, and politicians even issued hurtful statements. [That al-Islam reporter got away scot-free for the ruckus he caused. As usual. This fool Icker Tee is spinning himself dizzy.].

Sometimes I am very sad when I observe our politics. Not defending friends. Friends become enemies simply due to fear of losing power. If there are any issues they feel are not favorable, they are willing to stab a friend.

I'm not saying masquerading in the church should not be censured, but as Malaysians, we also have a right to know what happened there. Was it not true, Muslims were being converted at the church? If it affects the Muslims, there is silence on our part but if it affects them [the ultra kiasu/Christians], they all consider themselves victims. Isn't the issue of apostasy to be defended by Muslims more important than siding with the cause taken up for those who die when they are being investigated by the authorities as they may well even be guilty. [I think he is saying the deaths in custody are unimportant.]

Lina Joy is just one among so many young Malays who have plunged into the valley of unbelief [i.e. become an infidel]. I do not know if the top leaders are aware of this wave of Christianization, or do they know but are unable to contain it? To date, they have not addressed these unhealthy symptoms, or are deliberately waiting to let the issue resolve itself.

No doubt there are churches that are centres for condemning and putting down the Islamic religion. Watch this youtube video: http://www.youtube.com/watch?v=sxmt78dtxsg.

How can a Christian priest insult and condemn Islam? Imagine if we were to speak so, then we will be criticized, slammed and come under the glare of great publicity. [Yeah right! It's stupid to the point of being comical]. This youtube video is just one in a thousand, many more criticize Islam. Muslims remain silent. No protest is made. According to my friend, this is what happens in many churches in Malaysia.

Imagine if we were to do the same, then the Christians would all unite to fight, to urge the government to take action against the Muslims who criticize Christianity. Although non-Muslims are forbidden from spreading their religion to Muslims as guaranteed by the constitution, but they do not care about observing the strictures, because we are not concerned. We are too lenient for fear of losing votes [Aren't you impressed by how brazenly he tries to claim that Muslims are being oppressed and taken advantage of by the Christians?].

All our weaknesses are obvious to Christians. For these reasons, they are so bold and hard-hitting. We are just too fearful. I would like to remind all of us, our strength is not dependent on the Malay but our strength depends on Islam. If Islam among the Malays is destroyed, the Malays will be destroyed some day.

If you would like to read more fear-mongering and outright lies, you know exactly where to go - Icker Tee's website.

The educated and moderate Muslim Malay would not be fazed by this sort of foaming-in-the-mouth. But what about the impressionable, not so intelligent one?

What's scary is that his blog has got 2,000 followers. It would be of great concern if they think he's someone who knows the Chinese psyche because even if he may be Chinese, he hasn't got a clue.
By Crankster at 21:53

This guy is a virus program set loose to create maximum havoc. Wonder who programmed him?

Yes, he's a trojan horse virus and he's very dangerous because he preaches quietly to those who would listen.

That's 2000 minds also being programmed to hate their fellow countrymen.

I'd like to think that he's just a mistake some man and woman made in a moment of weakness, but most likely he's a victim of circumstances.

I suspect he was never accepted by the Chinese community where he came from, so he hates them all.

It's possible to feel pity for him, but in the big picture, he is a real threat to stability and peace. And of course, a new government.

And the person who is clearly in danger is Anwar.

Taikohtai - what do you mean?

This Man Is Spiraling out of control! and obviously he has a personal agenda. He is all about himself, a nobody trying to climb the political ladder. Idiot forgets he is Chinese!

Either self-hatred or
unprincipled opportunism (or both).

Joshua Lopez - yes, it's almost comical, if it weren't so dangerous. He identifies with the Malays and continually plays the "Us" against "Them" race and religion card.

Phua Kai Lit - that is a very interesting bit of information. He certainly displays startling amounts of self-hatred in the way he attacks the Chinese. I always thought he was an opportunist, but it could be just a virulent strain of self-hatred after all.