The Perhimpunan Rakyat will be held on 9 July 2011 at a time to be confirmed.

BERSIH 2.0 has been advocating electoral reform but demands have fallen on deaf ears.

The purpose of the event is threefold:
1. To further press for the rakyat’s demands for electoral reform
2. Strengthening of public institutions
3. To take a stand against widespread corruption at all levels of society

The home minister delivered a hostile response, describing the rally as a move to create chaos and jeopardise Malaysia's international image. 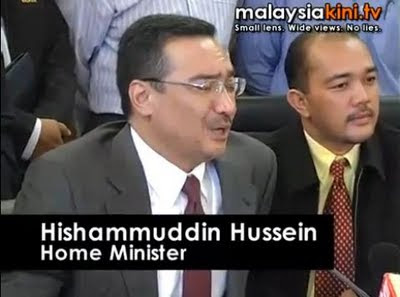 This, ladies and gentlemen, is the same buffoon who was falling over himself to defend the cow head thugs.

Oh yes. We have an international image - as ill-treaters of refugees, harbourers of terrorists, racists and unstable idiots.

It can't go lower than this. The good thing about hitting rock bottom is that from now on, we can only go up. At least I hope so.

and i shall be in front of the tv from across the strait to follow the progress...

Zewt - it should be exciting, and you're missing all the fun!

Joshua Lopez - I don't know if they were any better. My father wasn't a huge fan of Hussein Onn and was in fact glad, that he died under shady circumstances.

Hussein Onn didn't die in Office. It was Abdul Razak that died in office. Hussein Onn died many years after retirement in San Francisco.

My Grandparents and Parents always spoke very fondly of Abdul Rahman & Hussein Onn. My parents cried when Abdul Rahman died, i was in primary school.

The 3 generation of leaders before Hishammudin fought hard for a one party system, they eventually became an outcast in their own party due to their views that were seen as "damaging the malay power" and "too liberal!." Both left office in utmost disgust towards UMNO.