Figment Of The Imagination

A month ago, the Malaysian government publicised the arrest of 17 for alleged terrorist attack plot in Kuala Lumpur.

Rather conveniently, this was just after the proposal of a counterterrorism law that would reintroduce indefinite detention without trial or judicial review, and violate due process rights - all in the name of preventing terrorism.

Prevention of Terrorism Act 2015 was eventually passed into law.

You may remember it because our idiot Opposition MPs did not bother to show up and oppose it.

So where are those 17 alleged terrorists? 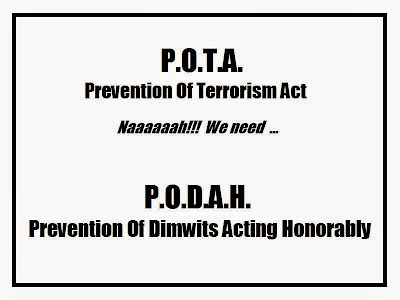 Do they really exist or are they a figment of the government's imagination - merely created to breed fear and apprehension?
By Crankster at 12:21

I dunno. But I know that the Govt wants to terrorise me! I am scared so I will not speak out against that poor man's tax called GST. Do not want to be seditious.