What Do We Do With The Rohingya?

I confess that this is the first time I am making a concerted effort to find out where the Rohingya people of Myanmar actually come from. 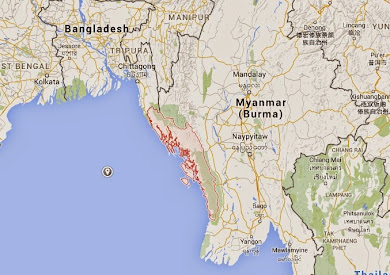 Given the proximity of the state of Rakhine with Bangladesh, it explains why the Rohingya share similar features and a common religion with the Bangladeshis.

More dismally, Myanmar and Bangladesh seem to share oppressive governments and religious extremism, which is why both groups of people are fleeing their countries.

Unfortunately, Malaysia does not welcome them. "We won't let any foreign boats come in," Tan Kok Kwee, first admiral of Malaysia's maritime enforcement agency said Tuesday. Unless they're not seaworthy and sinking, he added, the navy will provide "provisions and send them away."

It's not that Malaysia has ever been nice to refugees. Kuala Lumpur has refused to sign the treaty at the United Nations Refugee Convention and has a record of mistreating refugees.

Amnesty International Australia's refugee co-ordinator, Graham Thom, once said, "If you're looking for a country in the region that has some of the harshest policies towards refugees and asylum-seekers, then you couldn't really go past Malaysia."

It's rather harsh, very embarrassing, but unfortunately closer to the truth than anything.

I found it strange, because Malaysia very calmly deported a bunch of Uighurs back to China, where they would inevitably face the wrath of the Chinese government.

It goes to show that when it comes to the 'Muslim brotherhood', refugees don't make the cut. All those protests against atrocities in Palestine must have been just grandstanding. Love from a distance.

Lest you think I am a saintly soul for sympathising with the refugees, allow me to disabuse you of that notion.

In the heat of the moment, I wrote a nasty open letter to the refugees. I was unhappy about the thought of them being used as voters by the BN government.

But in my more sane moments, I have considered the predicament of refugees in greater depth. I acknowledge that refugees do not become refugees on a whim. It is usually desolate conditions that drive them to that situation.

And while we may have our own personal interests and families to take care of, what are we, and what have we become?

Can we claim to be successful, when our behaviour is akin to miserable, self-centred turf-lords?

The measure of a nation's success is how we treat the poor, regardless whether they are our citizens or not. Have we failed?
By Crankster at 12:37

Email ThisBlogThis!Share to TwitterShare to FacebookShare to Pinterest
Labels: Refugees