An earthquake of magnitude 6.0 at 40km deep occurred near Kota Kinabalu, Sabah, at 7.15am today, reports the European-Mediterranean Seismological Centre. 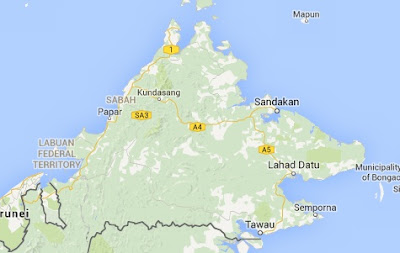 Initial reports from the Malaysian Meteorological Services Department said the quake, measuring 5.7, struck 25km northwest of Ranau at 7.15am.

Read the rest at The Malaysian Insider.

Tremors were felt around the west coast and interiors of Sabah, but Mt Kinabalu and Ranau were the worst-hit. There have been several on-going aftershocks as well.

Several landslides have occurred as a consequence, and climbers on Mt Kinabalu were stranded. It was particularly unfortunate that the earthquake occurred at 7:15AM, as the climbers usually reach the peak at about 6:00AM for sunrise.

Rescue operations are underway, and climbing Mt Kinabalu has been cancelled. I doubt anyone really wants to go up anyway. Not at this moment.

According to search and rescue, the death toll is not expected to exceed 18 altogether. This is based on the assumption that the 6 still-missing people are dead. However, everyone else is accounted for.

The losses include a 12 year old Singaporean student and an experienced mountain guide.

Robbi Sapinggi was accompanying climbers when he was hit by falling rocks.

Despite being injured, Robbi’s only thought was for the welfare of his guest, urging his guest to continue ahead to climb down the mountain to safety.

Unfortunately, Robbi himself was unable to make it down the mountain in time to receive proper medical attention, and he died from loss of blood.

Going by the comments on social media, Robbi Sapinggi was a selfless and much-loved man. My thoughts go out to his family.

Email ThisBlogThis!Share to TwitterShare to FacebookShare to Pinterest
Labels: Sabah