I confess it's all getting very confusing for me.

From the very beginning, Dr Mahathir was never an ally to any protest that I have ever attended. In fact, most of the draconian measures for crowd control that were employed by the government, had been put into place by Dr M himself.

Even the Internal Security Act (ISA) was frequently used by the Mahathir administration, and was handed down to the Badawi administration. Check out how the FRU dealt with anti-ISA protesters.

Back then we easily achieved over 100,000 protesters. There was one event that even had a tally of 200,000; however, these days, they struggle to achieve a tenth of that. Even the organisers admit to only 25,000; Malaysiakini is more truthful in admitting it was only 8,000 at its peak. Naturally the police claim it was much less.

They do that everywhere, by the way. They always claim there were fewer people than there actually were.

I confess it is hard work trying to count the people as they seem tiny in a sea of human bodies, but it irritates me when they attempt to belittle a movement just to please their political masters.

But what is behind the decrease in number of people attending these rallies and demonstrations? Have people grown weary of protest?

There hasn't been much news coverage on it yet, save Malaysiakini (of course!) and intriguingly, Sinar Harian. 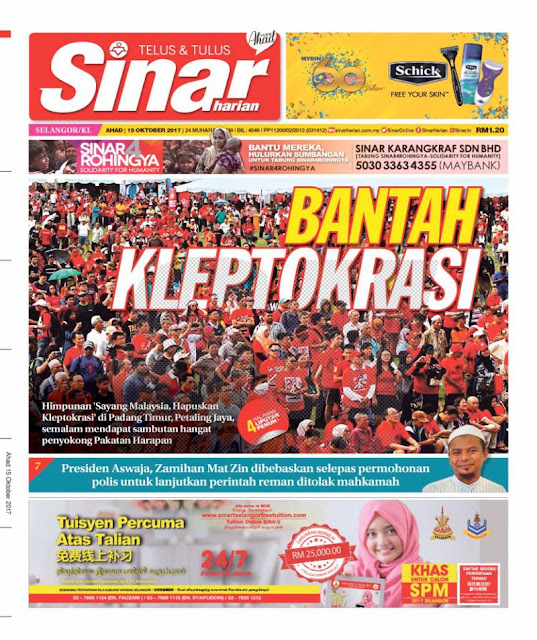 I suspect they are throwing their weight behind Dr M as he has teamed up with the Opposition (Pakatan Harapan as it is called now) who supports this rally. Clearly, he has been a key ally in the attempt to bring Najib down, with some rather interesting promises to make: "First thing we do when we're in power," he said in the closing speech, "is to arrest MO1 and try him."

This is far more fiery than anything we have ever seen in the past. The Opposition has always been very tame in front of the media, inexperienced but anxious to sell their brand of politics to all walks of life, from rich to poor, urban to kampung, Chinese, Indian, Malay, East Malaysian. Everyone.

Dr M clearly has an agenda, be it for nationalistic reasons (he is in his 90s after all), or to achieve a personal vendetta (you'd think he'd have mellowed by now). Back in those days, I used to call him the Loony Tun.

Though, somehow I do get the impression that in those 20+ years of power, the shenanigans he's been up to was well-intentioned but misplaced, from firing the judiciary who ruled against his wishes, to urging the administration of the day not to be soft on protesters.

He saw himself as a benevolent dictator, and that seems to be an equation that works for Singapore.

I am not so sure how I feel about his calling Ambiga's datukship to be stripped; it just seemed extraordinarily malicious.

Well, there you have it. Zaid Ibrahim seems to be throwing his weight behind him, and implies that he is the solution to "a country gone mad".

I am not sure I can forgive Dr M for the draconian laws that he employed, and the way he screwed up our democratic system. But he's here, and we need Najib to be gone. And we are going into this strange political relationship with our eyes open.

I don't know if protests are any indicator of election votes, but I am hopeful. Perhaps we may see some change in GE14.
By Crankster at 08:31